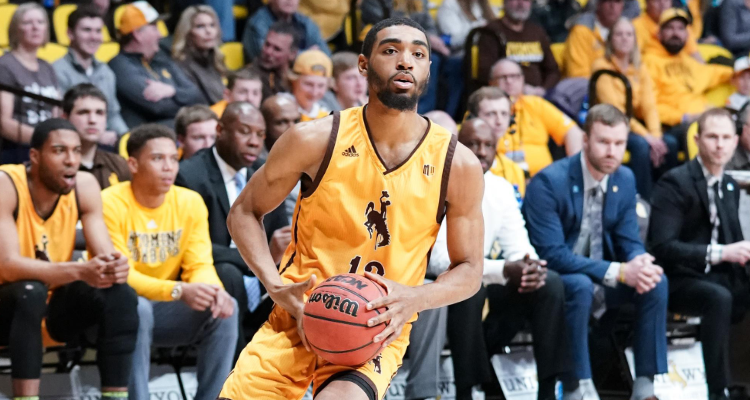 LARAMIE, WY. – The Nevada Wolf Pack, the highest ranked team to come to the Arena-Auditorium in five years was too much for the Cowboys to overcome in a 82-49 defeat on Saturday evening. The Cowboys were held to a season low 49 points on a season low 30 percent from the field. The Wolf Pack move to 24-1 overall and 11-1 in the MW, as Wyoming falls to 6-19 overall and 2-10 in the conference.

“Nevada is a very good basketball team,” Wyoming head coach Allen Edwards said. “Their mentality coming on the road and playing as hard as they did is a credit to Coach Musselman, his staff and their players. They did a great job of executing their game plan. It was a learning experience for our guys. I appreciate the fans for sticking around til the end. I thought the student section and our fans did a great job of continuing to encourage our guys until the very end of the game.”

Wyoming was led by senior guard Justin James with 16 points. He has scored in double-figures 22 times this season and 85 times in his career. He led the Pokes with four assists and added seven rebounds. Freshman Trevon “TJ” Taylor added 13 points and led Wyoming with eight rebounds.

“In our game earlier this week at Utah State, we saw the passive TJ (Taylor), but after watching film with him and addressing that with him this week he came out tonight with great energy,” Edwards said. He did a good job of being aggressive and taking shots when he was open. I told him that is what we need to see from him every night.”

The Pokes were 15-of-50 from the field and 6-of-24 from behind the arc. Wyoming was averaging 12 three pointers per game over the previous three contests. The Wolf Pack shot 50 percent from the field and owned a 40-28 advantage on the glass.

The Wolf Pack raced out to a 9-3 lead in the opening three-plus minutes. Cody Martin did the damage for Nevada with seven of those points. Wyoming’s James would hit three free throws to make it an 11-8 game with 14:36 left in the half, but the Wolf Pack’s Jazz Johnson added a triple and a pair of free throws from Tre’Shawn Thurman made it a 16-18 game less than a minute later.

Nevada went on an 8-0 run over 3:30 to build a 24-10 advantage. The Wolf Pack were shooting 64 percent from the field going 9-of-14 to that point. The run was halted by a free throw from James. The Pokes went 1-of-9 from the field during the stretch.

Nevada built the advantage to as much as 17 points with 9:20 left in the opening frame. Taylor continued to be a threat offensively moving to nine points on the night making it a 32-18 game with just under five minutes left.

Johnson closed out the half with a three pointer to give the Wolf Pack a 36-20 lead at the break. Wyoming was held to 27 percent from the field with Nevada shooting a solid 50 percent.

Junior A.J. Banks opened the second half with an alley-oop off a nice dish from James. But the Pokes would go 1-of-8 from the field after allowing the Wolf Pack to build a 45-25 lead with 14:40 left in the game.

The Pokes went on a 5-0 run with a jumper from Taylor and a triple from Banks to make it a 48-30 game with 13:15 left. The bucket from Taylor got him to double-figures for the seventh time this season and the first since playing at Boise State.

Nevada would answer with five made buckets in a row to build the lead to 60-33 with under nine minutes remaining. Nevada’s Trey Porter became a force in the paint helping the Wolf Pack build a 31 point lead at 74-43 with three minutes remaining and would take the game 82-49.

The Wolf Pack had five players in double-figures on the night. Trey Porter led Nevada with 14 points. Thurman finished the evening with a game-high 12 rebounds and added 11 points. Jazz Johnson was 4-of-5 from the three point line.