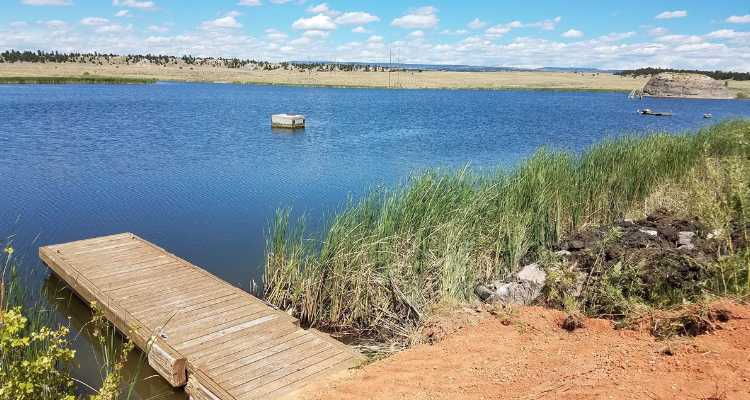 In winter 2019, Sheridan Region Habitat and Access Coordinator Seth Roseberry removed a portion of the wooden fishing pier at Osage Pond off Highway 16 and in mid-June 2020, two new piers were installed.

“This was an effort to replace the wooden, deteriorated pier with something safer, more permanent and more usable for anglers and recreationists with small watercraft,” said Roseberry.

Roseberry also installed a new floating boat dock at LAK Reservoir during the same week. The dock is anchored on shore to large concrete blocks and attached brackets will allow the dock to rise and lower with varying water levels. This is the first installation of a functioning boat dock at LAK in several years.

The three docks were donated to Game and Fish by the National Park Service which removed them while upgrading and replacing boat docks and slips in the Bighorn Canyon National Recreation Area northeast of Lovell, Wyo. Additional donated boat docks will be recycled and used at other Game and Fish Public Access Areas in coming months.

LAK Public Access Area operates under a long-term lease agreement between Game and Fish and True Ranches to provide a community fishery. Osage Pond operates under a public access easement with Black Hills Power and Light. As a reminder, no watercraft with internal combustion engines are allowed on Osage Pond.