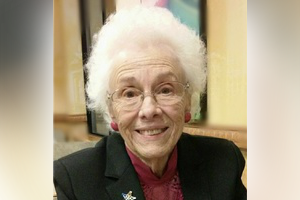 Annabelle was born at home near Jireh, WY to Alfred and Dora Lincoln on October 18, 1922. She grew up experiencing life as the daughter of a ranching family during tough times, causing the family to move often and find work.

In 1940, Annabelle graduated from Moorcroft High School and taught country school in the surrounding areas. She drove school bus during the blizzard of 1949 and worked several secretarial positions in Upton, Sundance, and California.

On Oct. 18, 1952, Annabelle married Lyle Hamilton. They worked for the Flying E Ranch outside Moorcroft for a short time and welcomed their daughter into the world. The couple moved to Lyle’s home ranch outside Osage in 1956, where they were blessed with two sons. Annabelle opted to be a stay-at-home mother and grandmother the remainder of her life.

Annabelle encompassed God’s love for people and tried to share it with everyone she met. She always had an open home and heart, listening ear, great conversation/advice, and sweet treats for those who needed it most (or didn’t). She loved her country life, enjoying her family and neighbors, cooking, gardening, and ranching.

Annabelle enjoyed community and was an active member of the Methodist Church, Order of the Eastern Star, Skull Creek Ladies Club, Farm Bureau, Upton Coop, and more. Some of her fondest memories were travelling the country with Lyle on trips earned through these organizations.

Funeral services for Annabelle will be held at the Weston County Senior Citizens Center in Newcastle on August 6, at 2:00 pm. Burial at the Greenwood Cemetery in Newcastle will immediately follow. In lieu of flowers, Any memorial donations may be made to the Skull Creek Community Center in care of Francie Hamilton at 1142 Green Mountain Rd, Osage, WY 82723.