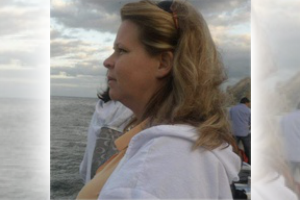 Danette was born September 21, 1971 to Duane and Donna Alexander in Belle Fourche, SD. She attended school in Osage, WY and graduated from Upton High School, while in Osage she was a Brownie in the Girl Scouts. She married Travis Kidd in 1990, they had two children, Kristi Kai and Kyle James. The couple later divorced. In 1994 she married Jerry Jones and they had a son, Donnie Lee, and Jerry became a father to Kristi and Kyle. Danette’s smile and laugh became quite a trademark for her. She was a bus driver for the school, a mine bus driver, substitute teacher and equipment operator for the Black Thunder Coal Mine.

Danette joins her only brother, Dustin, her grandparents, and Kristi and Kyle’s father Travis in Heaven.

Memorial services will be held at 10am, Thursday, May 24, 2018 at the Kitty Moats School in Osage, WY. Inurnment will take place at a later date.