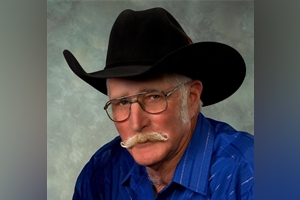 Ross Sapp, 78, of Upton, WY passed away Friday May 12, 2017 after a short battle with lung cancer surrounded by family.
Ross was born in Gray County, Kansas at home to Leslie Sapp and Harriet (Thompson) Sapp. He was the 9th child of 10. He grew up in the heart of farm country near Cimmaron, KS on the Thompson Homestead.
As a young child he developed polio in his left leg, after surgery the cast was placed too tight eventually he had to have his leg amputated at the age of 11, he was in the hospital in Witchita, KS for 3 months. Since he could not go outside, he raced high back wooden wheelchairs in the hallways and the nurses were not very nice about racing. So like usual he was in trouble, but he charmed his way out. You would never know, and some people didn’t even know he had an artificial leg, he worked hard he didn’t expect to be treated any different.
He graduated High School from Cimmaron, Kansas in 1956. After graduating he moved to Califonia , traveled to Mexico before returning to Kansas to begin working on the harvesting crew with his Dad and brothers Ralph and Dean. While working in Scottsbluff, Nebraska he met wife Glenda DeMaranville. They were married in the Baptist Church in Scottsbluff, Nebraska in September 1959 and shortly after moved to Cimarron, Kansas. He worked the Ingalls feedlot for 3 years. He trained a new horse every 6 months, including training them to open and close gates so he did not have to walk through the pens when he checked cattle twice a day. After he left the feed lot they reported a loss, his dedication, horsemanship and diligence in checking cattle was a unique trait that was hard to find.
In 1966 they moved to Wyoming and moved to the Hagerman place between Sundance and Upton. Where he was able to refine his skills as a farmer and rancher. He irrigated, grew corn and wheat and hayed the property. He hosted several hunters from across the country yearly, where he made life long friendships. He raised hereford cows and loved to rope and team roped often.
He frequently visits neighbors for early morning coffee, often just after the sun came up. He was always willing to help, and dedicated to community. He said to have good neighbors you have to be a good neighbor.
In 1982 they moved into Upton. He did custom haying, farming and spraying for several years, drove truck for Dan Hart Patrol, did custom fencing jobs and excavation work around the area. In 1989 he began working for Pickrel Land and Cattle full time and moved to the Watt Ranch on Buffalo Creek Road. He drove truck for Burch Rodeo and enjoyed taking care of bucking horse colts. He was thankful for the opportunities and that he could share the country life with his grandchildren and teach them work hard and play hard. Ranching, and farming was a life style for Ross, never just a job, he was thankful for the friendship and relationships built over the years with the Burch crew.
He took pride in good friends, good conversation and a cold beer. He never knew a stranger, and touched thousands as he left a lasting impression through jokes, ornery pranks and laughter.
He is survivied by his wife Glenda, daughters RaDona (Jay) Borgialli of Gillette, Shar (Chad) Escott of Faith, SD, and Karre (CJ) Fisk of Rozet, and grandchildren Katie, Bryan (Ashley), Kyle Borgialli, Korey (Brie) Milliken, Mindy (Matt) Peters, Shelby Milliken, Tyrell, Troy, Shai, Sydnee and Tukker Fisk, greatgrandchildren Kirk Milliken, Colvin Perry, Briggs Borgialli, Brookley Peters and Baby Miliken in September. Siblings Clarance (Martha) Sapp of Fort St. John, Northwest Territory, Canada, Betty Patton, Portland, Oregon and Jane Sapp of Indonesia and numerous nieces and nephews in United States and Canada.
He was proceeded in death by his parents Leslie and Harriet Sapp, siblings Hazel Flowers, Eve Blum, Lessie Dome, Marilou Whiting, Ralph Sapp and Dean Sapp.
In lieu of flowers a Memorial has been established at Pinnacle Bank in Moorcroft, WY. The service will be held @ 10:30 am Thursday May 18, 2017 at the United Methodist Church in Upton, WY, burial to follow. A celebration of Ross’ life will be held @ Upton Community Center following the services.