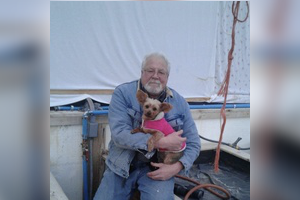 Jonathan Reed Bayert was born to David and MaryAnn Bayert in St. Charles, Illinois on November 18, 1956. His mother and brothers moved to Laramie, Wyoming in 1962 after the death of his father. He graduated from high school in Casper, Wyoming and from Prairie Bible Institute in Three Hills, Alberta.

Jon worked as a directional driller in oilfields from Wyoming to Canada to Japan. He and his brothers were partners in a directional drilling business for a while. He was known as a perfectionist on the job and was sought out by several oil companies.

Jon was a man of great passions. He loved riding motorcycles—taking ride with Jon and his wife, Susan, usually meant he was waiting at the end of a twisty canyon for the more cautious riders. Jon loved working with children and kids loved him. Jon spent many happy hours spoiling his grandchildren. In recent years, he worked with school children at the Ark After School program in Deer Lodge, Montana. “Big Jon” was a favorite of the kids and he took great joy in helping them know Jesus better. Jon loved his dogs. For a big guy, he had a soft spot for dogs of all sizes, but especially for his little Lacy.

His greatest love was for Jesus. Jon accepted Jesus as his Savior when he was about seven years old. While he spent some years as a renegade and rebel, he wholeheartedly loved the Lord and would share that love with anyone.

He is reunited in Heaven with his father, his brother Chuck Slaughter, and his grandma Nora. Jon is survived by his beloved wife Susan; his children Jonathan (Stacie) Bayert and Kristen (Chris) Waggle; stepdaughters Melissa Martinson and Chelsea Mayo; his mother and brothers Jim Burton, David Bayert, Jeff Bayert, Barry Bayert, Billy Bayert, Kristofer Burton, and Caleb Burton; his grandchildren, nieces, and nephews.

A celebration of Jon’s life will be held on Friday, May 4, 2018 at 1:00 p.m. at the Fidler Roberts and Isburg Funeral Chapel on Main Street in Sundance, Wyoming, with interment to follow in the Moore Hill Cemetery at Hulett, Wyoming. A reception in Upton will follow the burial. In lieu of flowers, memorials may be made out to the Upton Fire Department, P.O. Box 278, Upton, Wyoming 82730.

Arrangements are under the care of Fidler-Roberts & Isburg Funeral Chapel of Sundance. Online condolences may be written at http://www.fidler-isburgfuneralchapels.com.