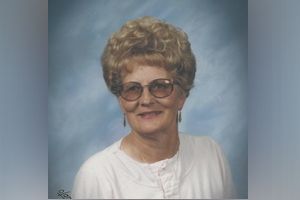 Mrs. Kay C. Stabnow, formerly Mrs. Kay C. Patterson, age 83, went home to be with the Lord on January January 28, 2018 in Jackson Tennessee. She had been living with her daughter, Valery Freese, in Milan, Tennessee these past five years while bravely battling with dementia.

Kay was born May 17, 1934, in Red Elm, South Dakota to Ole and Ella Quam. She was the oldest of three siblings all of whom have preceded her in death. Kay married James H. Patterson in Newcastle, Wyoming on August 4, 1951. They were married 35 years until his death in 1986. In 1989, she married again to Merle Stabnow. They were married until his death in 1997. During her years in Gillette, Kay was a valued employee of Decker’s Food Center where she was both the Bakery and Deli Manager for many years. She was a dedicated and tireless worker with an incredible work ethic. She enjoyed spending her retirement years commuting between Wyoming in the summer and Arizona in the winter where she would host many Gillette friends on her property in Quartzite. She was a loving, outgoing person, and even in retirement she could be found working in the Pie Wagon serving the other retirees her delicious pies or waiting tables at Sweet Darlene’s. She was an avid RV traveler, snowmobiler, skier, card player, cook, baker, famous fighter of dirt, hostess to anyone who needed a bed and visitor to the shut in. She was someone who truly never met a stranger, and never failed to invite a guest in for dinner.

Kay is survived by her two children: Kirby J. Patterson of Colorado Springs, CO, and Valery L. Freese of Milan, Tennessee. She is also survived by 7 grandchildren, 7 great grandchildren, several step-grandchildren and her 2 stepsons Leland Stabnow of Gillette, WY and Monty Stabnow of Blackhawk, South Dakota. In lieu of flowers it would be her wish that you simply invite someone to your home for a meal and share the love of the Lord. Memorials and condolences may be sent in care of Gillette Memorial Chapel 210 West 5th Street, Gillette, WY 82716. Condolences may also be expressed at www.gillettememorialchapel.com