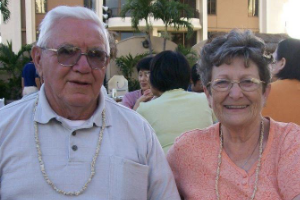 Newcastle   –    Kenneth W. McCollom died Sunday, March 25, 2018, at Weston County Health Services in Newcastle, Wyo. Ken was the youngest of three children, born to Harold V. and Gretchen (Thornburg) McCullom on Nov. 12, 1935, near Sundance. He was raised in Osage and attended school there until graduating from eighth grade. He attended high school in Newcastle, graduating in 1954. He married Patrica Braley in 1953. They had two children, Ricky and Joyce. They later divorced. He later met the love of his life, Arlene Trenham of Custer, S.D. They were married on June 25, 1960. To this reunion they had four children, Kenneth, Rodney, Todd, and one daughter who died at birth. Ken graduated from Wel-Tech Electronics school in Salt Lake City in 1963. He went to work for General Dynamics in California. In 1971, they moved back to Osage where he went to work for Butte Oil and Gas, Petrochemical Lewis, and other various places. Ken loved spending time with family and friends telling jokes. He loved to fly fish, camp, hunt, garden and play cards. He was preceded in death by his parents; one daughter, Arlene; two sisters, Eleanor (Tom) Beale and Phyllis (John) Reynolds; and one brother-in-law, John Reynolds. He is survived by his loving wife of 57 years, Arlene of Newcastle; his children, Rick (Linda) of La., Joyce Hall of Cheyenne, Kenneth of Missouri, Rodney of Newcastle, Todd (Lynette) of Nev; and numerous grandchildren, great-grandchildren, nieces and nephews. A memorial service will be held on April 7, at 10 a.m. at the Weston County Senior Center in Newcastle.