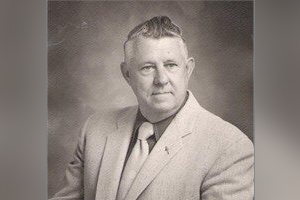 Gordon Haywood passed away July 20, 2017 in Newcastle, Wyoming. He was born December 8, 1927 in Sheridan, Wyoming to Roy & Mary Josephine Haywood. He joined two older sisters, Margaret and Janet.
His younger years were spent living and a ranch outside of Decker, Montana. Gordon joined the U.S. Navy in December, 1944. He spent his Navy service as a Seabees in the Pacific Theater.
He married Mary Lou Van Sickle on May 1, 1949. To this union, two daughters were born, Cheryl and Kristie. Gordon was blessed with 3 grandchildren: Donna, Jason and Laura and five great-grandchildren: Caitlin, Roland, Kyler, Sadie and Jameson.
Gordon is also survived by numerous nieces and nephews.
Upton his discharge from the service he spent about 8 months as a soda jerk. He then worked in the LP and natural gas business, retiring after 33 years. Gordon then went to work for Weston County School district in maintenance at all 3 schools. He retired after 15 years. During his lifetime Gordon was a volunteer fireman for 30 years, a lifetime member of the VFW, Knights of Pythias, and a Boy Scout Leader. He was a member of the Newcastle community since 1946, with a brief 9 year residence in Torrington, WY. He returned to Newcastle in 1969, where he lived until his death. He was well loved by his family and community.
Gordon was preceded in death by his parents, sister, and his wife Mary Lou.
A Memorial service will be held at a later date.