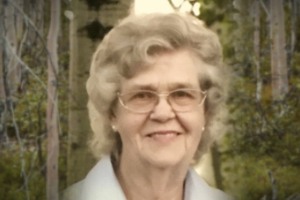 Newcastle, WY. – Barbara Lois Morrissey Johnson was born in Lead, SD, on September 5th 1934, to William Lawrence and Anna Mabel Henderson Morrissey. She attended school in Lead, SD until they moved to the family farm at Boyd, Wyoming, which turned out to be one of her most cherished places on earth. She spent many weekends of her life there, gardening and soaking her feet in the dam. She graduated from Newcastle High School in 1952.

Barb married her hero, Walter E. Johnson, on November 4, 1952. They made their home in Newcastle. They were blessed with two boys, William and Daniel, who were the center of her world. Later came along daughter-in-laws, Shawn and Sheri, four wonderful grandchildren; Brooke Ann, Amanda Jo, Megan Lynn and Matthew Walter.

Over the years, she was passionately known by many names; Sweetheart, Miss Barbara, the Good Witch of 3rd Ave (who gave out lucky pennies), Aunt, Mom, utter mudder and her favorite and one she was most proud of “Granny”.

Barb had many passions in her life first and foremost being a wife, mother and Granny. Other passions were volunteering and giving a home to orphaned animals. There was not an animal alive that was too homely or broken up for her to love. She volunteered at the food bank, humane society and for the census. Through the years, she worked as an operator at Mountain Bell, a nurses’ aid at the Weston County Hospital, and as an election clerk. Her church was a big part of her life as well and she was always willing to help wherever needed. She served on the Vestry Board, the Alter Guild, taught Sunday school and helped with and supplied the homemade choke cherry syrup for their annual pancake supper. Many would come just to have her choke cherry syrup (but as for Barb it was peanut butter and ketchup). She also served on the Boyd Cemetery Board. For 11 years, running a day care at her home brought her much joy.

Among some of her other loves were cooking, baking and canning. Her family always knew that when they sat down to supper on Wednesday nights there would be a new recipe on their plate. Some became family favorites while others were asked never to return! Sharing her baked goods, jams, jellies, syrup and bread and butter pickles with her friends and family filled her heart with happiness.

Barb lived a God fearing life and was never known to have an idle hand or mind. She loved to read and learn new things, knit, craft and sew. She taught her daughter-in-law many of her mothering, baking, cooking and canning secrets along with knitting. Sheri boasts of her mother-in-law and treasured the relationship she had with her. She was known by Sheri as her “utter mudder”.

Barb lived her last year of life in the Weston County Manor where she quickly became a favorite. She always made sure that there was a smile and a thank you said to everyone who helped her. She was very grateful for the wonderful care she received at her home there.

Barbara passed peacefully with her family around her on Monday, April 30, 2018 at her home at Weston County Manor.

She is survived by husband Walter; sons William of Newcastle, and Daniel (Sheri) of Sidney MT, daughter-in-law Shawn Zabka of Cheyenne WY. 4 grandchildren, Brooke of Cheyenne WY, Amanda of Vaughn MT, Megan and Matthew both of Sidney MT; sister in law Doris Mae Rogers of Gillette WY; niece Sheila (George) Rhoades of Gillette WY; brother in law Carl (Pat) Johnson of Panacea FL;
She was preceded in death by her father, mother and two sisters, Yvonne and Patricia.

Barbara’s memorial service will take place at 10 a.m. on Monday, May 7th at Christ Episcopal Church in Newcastle. Memorials may be made in Barb’s memory to Christ Church Episcopal Alter Guild, or The Weston County Humane Society.