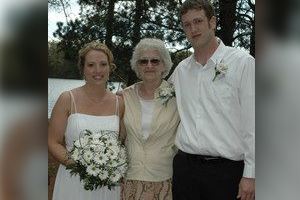 Osage, WY.   –   Dixie was born in Oberlin, KS to Ruby & Alvin Lunkenheimer, one of four children. She grew up in Rexford, KS. Following graduation from Rexford High School in 1949, Dixie worked in Topeka as a telephone operator until she moved back to Rexford to work in the family café for 2 years. She met Ed by winning the flip of a coin and they later married in 1955. They lived in Colby, KS and had 4 daughters before moving to Deadwood, SD where Ed & Dixie owned the PaHaSaPa Cabins & Campground, here they had 2 more children. Ed & Dixie moved their family to Osage, WY in 1965 and had one more child. Dixie worked in the Kitty Moats lunchroom for 19 years. She enjoyed sewing, gardening, painting, and many other crafts. After all the kids had left home, Ed & Dixie enjoyed traveling.