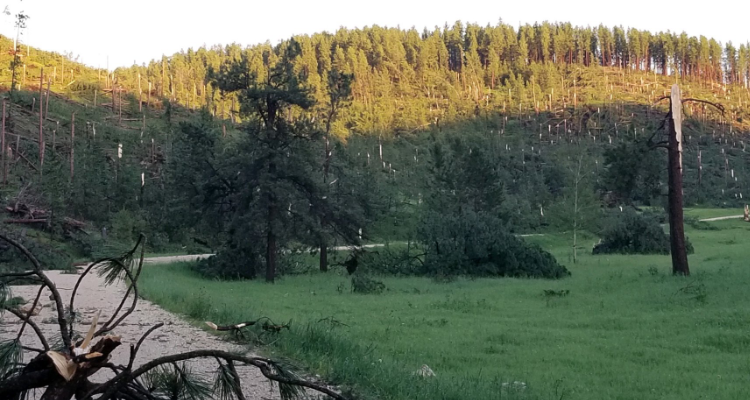 On the afternoon of July 6, 2020, thunderstorms developed across northeastern Wyoming and southeastern MT. They merged and strengthened as they moved over Sundance and into the Black Hills area.

A tornado was confirmed 7 miles NNW of New Haven, WY, and several other funnel clouds were reported around the Sundance area. Sundance received some wind damage from the storm. Another suspected tornado was reported near Cement Ridge in the Black Hills National Forest Northern Hills Ranger District, off of Tinton Road, which resulted in tree damage.

Crews were working yesterday to clear the Tinton Road section and planed to have it open by the end of the day. Crews were also working in the Timber Gulch Road area and assessing other areas that may be impacted.

Reconnaissance is underway to determine the extent and path of the tornado, and more details will be provided once official surveys have been conducted.

Tennis ball to baseball sized hail was reported over parts of northeastern WY, the Black Hills, and the Rapid City area. As the storm tracked eastward, it developed into more of a wind producer. Winds up to 75 mph were reported across parts of south central South Dakota.