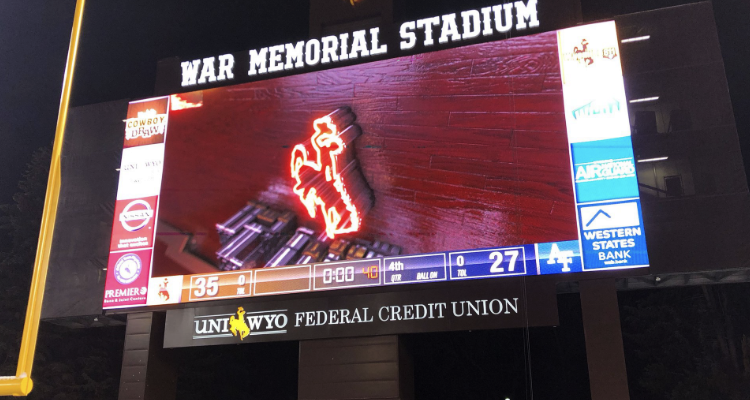 LARAMIE WY. – In one of the great comebacks in Wyoming history, the Cowboys scored three touchdowns in the final five minutes of the game to erase a 27-14 deficit and turn it into a 35-27 home victory over Air Force on senior night. It was a fitting way for a senior class, who has been part of so much success during their careers as Cowboys, to conclude their final home game on Jonah Field at War Memorial Stadium.

Redshirt freshman quarterback Tyler Vander Waal led the Cowboys on those three, fourth-quarter touchdown drives, while Cowboy team captains Logan Wilson and Andrew Wingard came up with interceptions on Air Force’s final two possessions as the Pokes improved their record to 5-6 overall and 3-4 in the Mountain West Conference. The win kept Wyoming’s hopes alive of achieving bowl eligibility for the third consecutive season. Air Force fell to 4-7 and 2-5.

“Going in to the ballgame, the two most productive guys we’d been playing with, Sean Chambers and Nico Evans, went down in the first series,” said Wyoming head coach Craig Bohl. “It’s an indication about our guys hanging in there. Tyler (Vander Waal) has been an ultimate teammate, and I told him you never know
when your opportunity will come again and we would need him again. That chance came tonight.
“I thought Air Force had a really good game plan, knocked us around up front and ate up a lot of clock. We came up with a couple of stops when we needed to, and it also shows our team really believing and not quitting. This was a big win for us.”

Wyoming’s fourth-quarter comeback began when it took possession of the ball at its own 24-yard line with 8:38 remaining in the game. After Vander Waal rushed for 15 yards and a first down on the first play of the series, four plays later the Cowboys would face a fourth and six from their own 43-yard line after Air Force declined a holding penalty to force fourth down. Vander Waal was able to find senior wide receiver James Price for an 11-yard completion and a first down. Pass completions of 16 yards to Price, 12 yards to junior wideout Austin Conway and another 16-yard completion to Price would follow, taking the ball down to the Air Force five-yard line. Vander Waal would take off up the middle for the final five yards to pull the Cowboys to within a touchdown at 27-21, with 4:32 remaining in the game.

The Cowboy defense forced a three-and-out on the very next series. Senior defensive end Carl Granderson tackled the Air Force fullback for no gain on first down. Sophomore defensive end Garrett Crall and Wingard combined to tackle the Falcon quarterback for only a two-yard gain on second down and senior free safety Marcus Epps tackled the Air Force QB for a two-yard loss on third down. After an Air Force punt, the Cowboys took over at the Wyoming 42-yard line with only 2:55 left in the fourth quarter.

A couple of incompletions and a false start penalty created a third and 15. Vander Waal rushed for six yards on third down to make it fourth and nine at the Wyoming 43. Vander Waal was forced out of the pocket on fourth down and as he ran to his right sideline he was able to connect with redshirt freshman running back Xazavian Valladay for a 12-yard pass completion and a first down. A holding penalty by Air Force would follow. Pass completions of nine yards to junior wide receiver Raghib Ismail Jr. and nine yards to senior tight end Tyree Mayfield would move the ball down to the Air Force 22-yard line. On second and 10 from the 22, Vander Waal concluded the drive with a 22-yard pass to Conway in the middle of the end zone. Despite a big hit put on Conway by an Air Force defensive back, Conway was able to hang on and junior place-kicker Cooper Rothe kicked the extra point to give Wyoming a 28-27 lead with only 1:09 remaining in the game.
Air Force took possession at its own 25 after the kick off, and on first down Falcon quarterback Donald Hammond III was intercepted by Wilson who returned it eight yards to the Air Force 22. Wyoming’s Valladay rushed for a loss of two yards on first down and a loss of three on second down as Air Force used their final two timeouts. On third and 15 from the 27, Valladay broke free up the middle and sprinted to the end zone for the touchdown, but Wyoming was called for holding. Only 45 seconds remained in the game and with no timeouts remaining Air Force head coach Troy Calhoun was forced to decline the penalty in hopes his offense could score in those final 45 seconds. With the penalty being declined the touchdown for the Cowboys stood, and they took a 35-27 lead.

Falcon wide receiver Marcus Bennett returned the ensuing kickoff for 13 yards to the Air Force 13. QB Hammond then completed a pass of 13 yards to Bennett on first down out to the 26. On second down, Hammond was intercepted by Wingard. The Cowboys had to run only one more play and they had completed the comeback.

There were many big performances by Cowboy seniors on Saturday. Senior tight end Tyree Mayfield had a career best 112 yards receiving and tied a career high with four receptions. Senior wide receiver Price tied a career high with four receptions, which went for 54 yards. Senior defensive end Granderson recorded 10 tackles for the second double-figure tackle game of his career. Senior safety Epps recorded eight tackles, including 1.0 tackle for a loss.

“We talked to our seniors about that this was their last time to play at War Memorial Stadium,” said Bohl. “This is such a special place, and we wanted to do everything we could to have them walk off with a win.”

“This team has bought in to the culture Coach Bohl has built, which is put your hand down in the dirt and never quit,” said Wingard. “Obviously, the crowd got involved late in the game, which helped. We just battled.

“I’ve said it since I came here that I couldn’t be more blessed to play at a place like this and in front of fans like this. Our student section is awesome, and I owe them and our fans everything. To be sent off by a crowd like that when it felt like three degrees outside is incredible. They are the best fans in the nation and supporting us the past four years since I’ve been here I can’t thank them enough.”

Other top performers by the Cowboys were Vander Waal, who threw for a personal best 225 yards. He tied a career high with two TD passes, set a personal best with two rushing touchdowns and was responsible for a career best four combined TDs. He completed 14 of 26 passes (53.8 percent) and rushed for 22 yards on eight carries to account for 247 yards of total offense on the day.

Junior Conway caught two passes for 34 yards and the game-winning TD. Sophomore Ayden Eberhardt caught two for 30 yards, and Ismail had two receptions for 20 yards and an 11-yard touchdown.

Sophomore defensie end Crall made a career high nine tackles, and junior middle linebacker Wilson had eight tackles to go with his interception that set up Wyoming’s final touchdown.

Air Force had two individuals rush for over 100 yards. Tailback Kadin Remsberg ran for 128 yards on 20 carries, and fullback Cole Fagan rushed for 116 on 17 carries. Quarterback Hammond finished with 90 yards rushing on 18 carries.

The Cowboys won the turnover battle, taking the ball away twice on their two interceptions, while Wyoming’s offense only turned the ball ovver once on a fumble.

While Air Force had more yards of total offense than Wyoming — 415 to 373 — the Cowboys were more efficient, averaging 6.4 yards per play on 58 plays as compared to the Falcons’ 5.9 yards per play on 74 plays. The Cowboys also were very efficient on thrid downs, converting 8 of 13 attempts for 61.5 percent.

The game began with Wyoming losing its top two offensive performers on the very first possession of the game. Senior running back Nico Evans and true freshman quarterback Sean Chambers both suffered injuries on the Cowboys’ first series of the game. The two had each rushed for 100 or more yards in each of the last three games coming into Saturday’s matchup with Air Force.

Evans went out after only two carries, and Chambers was injured on his only carry of the game. While Evans would attempt to return in the second quarter for one more carry, Chambers would not return and would be seen on the sideline on crutches. After the game, head coach Craig Bohl said he didn’t have any details on Evans or Chambers injuries, but would hope to know more in the next couple of days.

Vander Waal entered the game on that first series facing a third and goal from the 11-yard line. On his first play of the game, he threw a TD pass to junior wide receiver Ismail to give the Cowboys a 7-0 lead. A key play on the drive was a 37-yard completion by Chambers to senior tight end Tyree Mayfield.

Air Force would match the Cowboys as they would engineer a nine-play, 75-yard drive, highlighted by a 25-yard run by fullback Fagan. Falcon quarterback Hammond capped off the drive with one-yard touchdown run to tie the score at 7-7 with 7:38 remaining in the first quarter.

Vander Waal and Mayfield would connect on an explosive play on Wyoming’s second possession as Vander Waal found Mayfield down the seam for a 60-yard catch and run, taking the ball down to the Air Force 14-yard line. Freshman running back Jevon Bigelow would gain one yard on first down, followed by an eight-yard jet sweep from wide receiver Conway. Vander Waal would carry the ball for the final three yards to give the Pokes a 14-7 lead at the 4:44 mark.

The scoring would continue as Air Force would drive 75 yards in 12 plays with the big play being a 26-yard run by Fagan early in the drive. Tailback Remsberg carried the ball in from four yards out for the touchdown to tie the game at 14 all.

Air Force would scored the final points of the first half on a 27-yard field goal by Jake Koehnke with 1:50 to go in the half. The Falcons would lead at halftime 17-14

The Falcons took a 24-14 lead in the third quarter as Hammond scored from 36 yards out to conclude a nine-play, 75-yard drive that took 4:41 off the clock. Koehnke would add a 21-yard field goal, his second of the game, with 8:44 remaining to extend Air Force’s lead to 27-14. That would be the final points the Falcons would score.

Wyoming will conclude the regular season next Saturday when they travel to Albuquerque, N.M., to face the New Mexico Logos in a game to kick off at 12:30 p.m. That game will be broadcast on radio by the 26 affiliate stations of the Cowboy Sports Network.