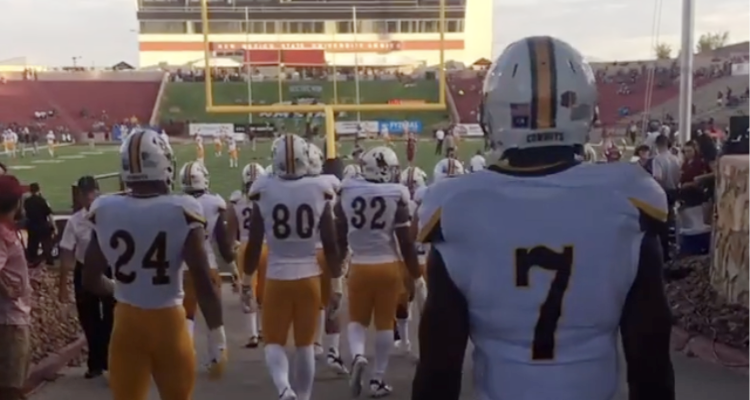 Las Cruces, NM.    –     The Cowboy defense held New Mexico State to 135 yards of total offense and the rushing attack of Wyoming racked up 313 yards in a dominate 29-7 win on Saturday evening in Las Cruces, N.M.

“To go on the road against a good opponent who won a Bowl game last season and earn a win it was a positive,” Wyoming head coach Craig Bohl said. “New Mexico State is a tough team and we answered the bell. We will learn a lot from the tape and get ready for another tough opponent in Washington State next weekend.”

Evans shined for the Brown and Gold rushing for a career-high 190 yards with two touchdowns. It was the most in a game by a Cowboy since Brian Hill did so with 289 against Nevada. Defensively, it was the fewest yards allowed by the Cowboys since 100 total offensive yards in the 2007 season opener against Virginia.

“We have seen signs of improvement from Nico (Evans) since spring ball and conditioning,” Bohl said. “He had a great night and we were pleased with the yardage. It is good to have three running backs in the backfield.”

The Pokes’ defense recorded three sacks and six and a half tackles for loss. Junior linebacker Tyler Hall led the Pokes with four tackles. The Wyoming defense also added six pass breakups on the night by five different players.

The Cowboys opened the scoring on a 24-yard rush from Evans in the first quarter on UW’s second procession, as he scored his first career rushing touchdown. The Pokes were solid on the drive with Vander Waal going 4-of-4 for 43 yards.

Wyoming added to the lead 20 seconds later with the Cowboy defense getting on the board recording a safety to make it a 9-0 contest with 6:16 left in the opening quarter. Carl Granderson and Logan Wilson were credited with the tackle.

Junior kicker Cooper Rothe added a pair of field goals in the second quarter to give the Cowboys a 15-0 lead into the break. He connected on kicks from 36-yards and 39-yards. Wyoming held the Aggies to 20 yards of offense in the half with 17 of those yards coming through the air.

Bigelow added a touchdown on a 23-yard run to make it a 29-0 contest in fourth quarter. It was the third rushing touchdown for the Cowboys on the day. New Mexico State added a tally late in the fourth quarter, as the Pokes took the contest, 29-7.