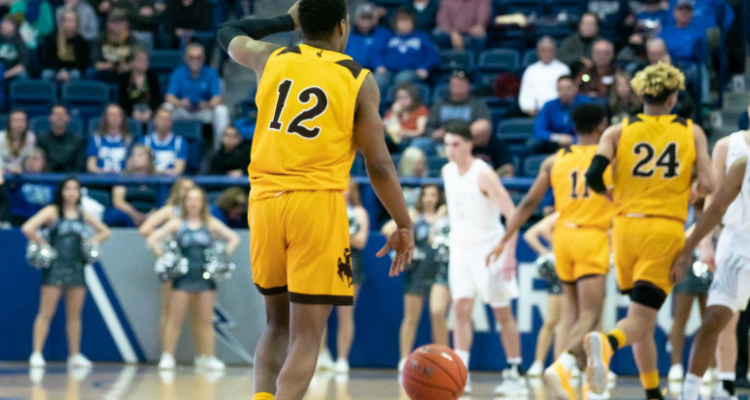 COLORADO SPRINGS, Colo.  – Sophomore Greg Milton III recorded a career-high 28 points and redshirt sophomore Hunter Maldonado added 19 points, as Wyoming downed Air Force 78-72 inside Clune Arena on Saturday afternoon in Colorado Springs, Colo. Wyoming shot 51 percent from the field for the game for the highest on the road this season and held the Falcons scoreless in the final two minutes of the contest.

“I thought it was a great job by this group getting it done on the defensive end of the floor today,” Wyoming head coach Allen Edwards said.  “The young guys really got it done for us. We got great stops late and we were able to convert offensively late in the game. We have been in this situation a lot this season, but today showed great growth. Our guys did a great job defending and taking care of the basketball and this was a great team win. It wasn’t one guy tonight everyone contributed to this game.”

Sophomore Greg Milton III had a career day with 28 points for passing his previous high of 12 points against San Jose State. He also added four triples for the game playing a career-high 35 minutes. Milton III scored 18 points in the first half for the most by a Cowboy in the opening frame since Sean Ogirri scored 20 points also at Air Force on Feb. 28, 2009.  Redshirt sophomore Hunter Maldonado added 19 points in his return to his hometown for his 25th game in double-figures. He also added seven rebounds and five assists to lead the team. The Cowboy bench including nine from sophomore Brandon Porter and six from freshman Kenny Foster for 45 bench points for the afternoon.

“I thought Maldoando did a great job tonight, but has done so all season,” Edwards said. “He went out there with four fouls and played smart and aggressive. Milton III did a great job for us tonight to put us into position to win the basketball game.”

Wyoming owned a 32-31 led on the boards for the game and added 16 points off of turnovers. The Pokes shot 39 percent from behind the arc and held Air Force to 21 percent, as the Falcons shot 57 percent in the first meeting in December.

The Pokes recorded five turnovers in the first four minutes of the contest, but defensively held Air Force to 1-of-6 from the field with the Falcons gaining the 3-0 advantage. Milton III put the Pokes on the board with a three pointer for a 3-3 game with 15:25 left in the first half.

Milton III would score 11-straight points for the Pokes to help build a 16-10 advantage halfway through the half. He scored 14 of the Pokes’ first 16 points, which was his new career-high. Milton along with help from freshman Kenny Foster and Sophomore Brandon Porter helped Wyoming build a 24-14 advantage with 6:57 left, as Milton III opened the game 6-of-6 from the field.

The Falcons would hit five-straight field goals to cut the Wyoming lead to 31-28 with 1:25 left in the first half. The Falcons would add one more bucket for their sixth-straight make for a 31-30 Wyoming advantage at the break. The Pokes shot 54 percent from the field in the half with the Falcons countering at 45 percent.

Freshman Kwane Marble II added a three-pointer and Milton III got to 20 points with a layup to give Wyoming a 45-44 lead with 12 minutes remaining. The two teams would battle going back and forth exchanging the lead until the Falcons built a 57-54 advantage on a jumper and three pointer by AJ Walker to build a 60-54 lead for Air Force.

Maldonado would throw down a dunk followed by a pair of freebies from Porter for a 72-70 game in favor of Air Force with 1:31 remaining in the game. Maldonado would add a three-pointer to give Wyoming a 73-72 lead with 52 seconds remaining, as it was a part of a 7-0 run by the Cowboys. The Pokes would then get it done from the free throw line taking the win 78-72.

The Flacons were led in scoring by LaVelle Scottie with 17 points for the night. Swan added 14 points and a game high nine rebounds.

Wyoming will honor seniors A.J. Banks and Jake Hendricks on Tuesday, as the Cowboys will host Nevada in the Arena-Auditorium in the final home game of the season.