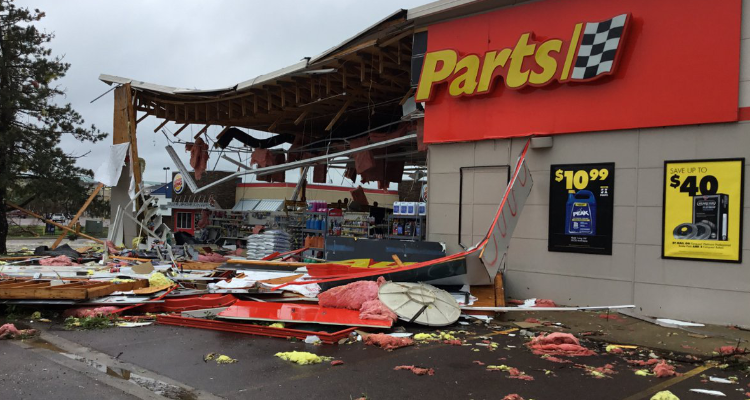 No serious injuries were reported.

National Weather Service meteorologist Todd Heitkamp said an EF-2 tornado that touched down in Sioux Falls with wind speeds of about 125 mph around 11:30 p.m. Tuesday caused significant damage in and around the Western Mall.

Elsewhere in the city, Avera Health System hospital staff took mere minutes to move more than 100 patients to safety in one of four buildings that suffered damage.

“We talk at our hospital about doing drills. I’ve got to tell you our staff was courageous,” said David Flicek, the president and CEO of Avera McKennan Hospital and University Health Center. “We had 10 minutes to wake up 102 residents, get them to the center of the building and all are safe and sound.”

Nick Gibbs, CEO of Avera Heart Hospital, said one patient had a “severe cardiac event” as the storm threatened that facility, but doctors saved his life.

The storm ripped off part of the roof and caused significant damage to windows at the behavioral health building, according to Avera spokeswoman Michelle Pellman. Many vehicles in the parking lots were destroyed.

Mayor Paul TenHaken said officials have received no reports of deaths in the city, and that they had been “fortunate to not have any serious injuries.”

At least 37 buildings collapsed or were damaged by the storm, and residents have been asked to stay away from the hardest-hit areas, Fire Chief Brad Goodread said at a news conference early Wednesday.

The Red Cross opened a shelter at the Sioux Empire Fairgrounds’ armory for people displaced by the storm. The city of about 190,000 people lies about 240 miles (390 kilometers) southwest of Minneapolis.

Heitkamp said the weather service issued several warnings as the fast-moving storm approached, including a tornado warning at 11:27 p.m.

At 11:30 p.m., members of the weather service office in Sioux Falls took shelter and transferred duties to a sister office in northeastern South Dakota, he said.

There was a snafu with the city’s outdoor siren warning system. Most of the sirens sounded in southeastern Sioux Falls, where the most serious damage occurred, but they were not activated in the rest of the city, TenHaken said, calling it a “miscommunication” among staff. He vowed it would never happen again.

“I’m owning it. It’s my team. It’s my administration,” the mayor said.

Xcel Energy says as many as 25,000 customers were without power at one point because of the damage, but that more than two-thirds of those had electricity Wednesday morning.

The storm system appears to have spared the rest of the state. The South Dakota Department of Public Safety received reports of flooding in Hutchinson and Brule counties, but no assistance was requested.

Here is a closer look at a few of the pictures from our damage surveys today. pic.twitter.com/2S49yeABR6