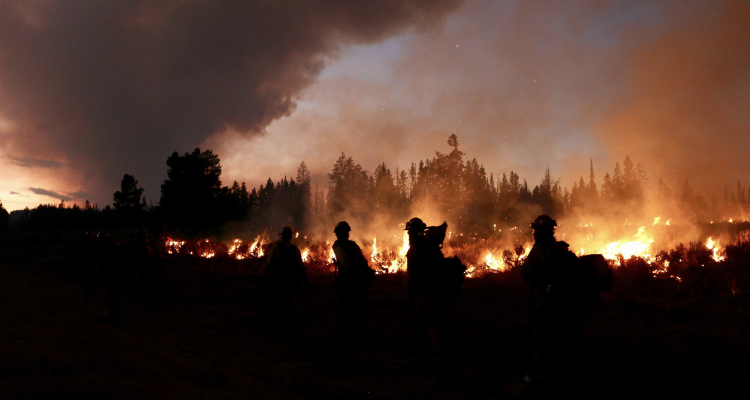 Sublette County sheriff’s officials said Thursday that the Roosevelt Fire burning south of Jackson, Wyoming, had now burned a total of 54,071 acres and was sitting at 35 percent containment.

All of the homes that were burned were near Bondurant in the Hoback Ranches development, which was comprised of 150 residences.

On Thursday, fire managers continued to reinforce containment lines on all sides of the fire, with the head of the fire along Highway 189/191 in the Rim area, being one the the main focal points in the effort. Containment work also continued in the Rolling Thunder area on the south side of the fire; and on the north side of the fire in the Kilgore Creek/Upper Hoback area. Firefighters also conducted burn out operations as necessary, attempting to secure fire lines.

Friday, fire managers expect to continue to reinforce containment lines on all sides of the fire. The focal point of the effort will be on the southwest side of the fire in the North Dry Beaver Creek area. Fire activity increased there yesterday as a result of strong winds. Much like on Thursday, burnout operations will continue, with the hope of holding the fire west of Jim Bridger Estates. The Sheriff’s Office has re-emphasized its GO evacuation level for Zone 8 – Jim Bridger Estates. Residents of Jim Bridger Estates should not be within the evacuation zone.

Officials have reported some success at holding the fire along the south side of Highway 189/191 in the Rim area. In Kilgore Creek/Upper Hoback on the north side of the fire, fire lines are holding and the threat has been reduced. In all areas, firefighters are continuing to shore up fire lines to further secure the fire. Interior areas of the fire continue to burn.

In Hoback Ranches, recovery efforts continue today in preparation of plans to allow small groups of homeowners back into Hoback Ranches to assess their property. Lower Valley Energy and Rocky Mountain Energy are working to restore destroyed infrastructure, and firefighters continue to clear dangerous snags and put out hotpots of fire as they occur.

Investigators have not released the caused the fire, which was first reported on Sept. 15.