70 Years Have Passed Since Blizzard of ’49 Devastated Plains 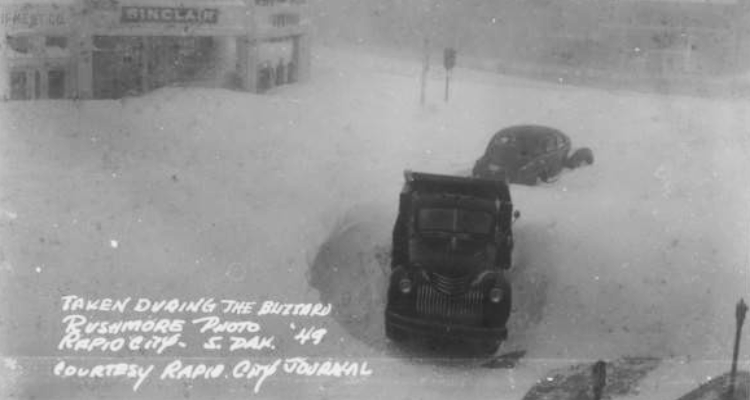 70 Years Have Passed Since Blizzard of ’49 Devastated Plains

RAPID CITY, S.D. (AP) — Seventy years have passed since one of the worst blizzards on record pounded western South Dakota with snow, piling up to the roofs of buildings and trapping residents for weeks.

State records show the Jan. 2, 1949, blizzard brought up to 50 inches (127 centimeters) of snow to the Black Hills over a month, with 70 mph winds and temperatures dropping to minus 8, the Rapid City Journal reported. The winter blast pummeled South Dakota and a large part of Nebraska for several weeks, leaving the region’s economy on the brink of collapse.

Chadron, Nebraska, saw at least 60 inches (152 centimeters) of snow fall in January 1949, and the ceaseless winds and snow kept roads and rail lines closed in both states.

Federal authorities led a disaster response because of the length of the storm and its impact on the area. The U.S. Army Corps of Engineers launched Operation Snowbound on Jan. 29 of that year, focusing on South Dakota and Nebraska, as well as North Dakota and Wyoming.

In South Dakota, state officials also helped alongside federal authorities, using planes to drop packets of yeast onto city streets and clothes to people trapped in their cars for days. Dynamite was used to clear railroad lines packed with several feet of snow.

Rapid City resident Jim LeMar remembered the drifting and its longevity as the worst elements of the 1949 storm, according to an interview with the newspaper six years ago.

“We’d no sooner get dug out of one storm and another would hit,” LeMar said.

For more on how the 1949 blizzard affected Weston County, read the article below written by Lucille Dumbrill and Earl Christensen.

The Blizzard of 1949 in Weston County

Taken from Wyoming History Journal, Annals of Wyoming
Published by the Wyoming State Historical Society in 1996
Publication believed to be in the public domain.

The blizzard of 1949 continued for three straight days. It began on Sunday, January 2, and raged continuously until Tuesday night, January 4. According to the report in the Newcastle News Letter Journal, “only a reasonable amount of snow fell but with the high winds over the entire area visibility was null and the drifting of snow was extremely bad.” 1 Earl Christensen and other ranchers in the area were completely snowbound and could not get any farther away from the house than to care for the livestock in the barns. They worried a lot, and with good reason, about the fate of the livestock out in the storm. The blizzard covered the state of Wyoming, but due to slightly different circumstances, different areas suffered in various ways.

As is often the situation, the city of Newcastle suffered very little because of the storm. However, the community was completely isolated for several days and even though local businesses remained open, grocery stores sold out of such items as milk, butter, and some meat items. The local bakery, owned and operated by Steve and Dorothy Accola, provided bread for the entire community as well as for Osage, Red Butte, Prairie Store, and the Mountain Inn during the entire emergency. This was particularly difficult since the yeast supply for the bakery customarily came in twice weekly from Rapid City, South Dakota. Since the yeast did not arrive, the bakery made bread by juggling formulas and, thus, using less yeast as well as using small cakes and packages of yeast from the grocery stores. According to the News Letter Journal, the bakers unwrapped eighty dozen small cakes of yeast during one night in order to make the ten oven loads of bread needed to meet the demand.2

The blizzard drastically affected train service. The last mail train came into Newcastle on Sunday evening, January 2. The last train out until after the storm was No. 42 Sunday evening. Monday noon, the local freight train came into Newcastle from Edgemont and was stranded in the local yards for several days. The east-bound local freight was stalled at Upton on Sunday evening. Mail service finally was restored Tuesday, January 2, when No. 42 from the west arrived at about 7 p.m., and train No. 43 came in about one hour later. 3

Clearing the tracks was an extremely difficult task, took much time, and had to be done again and again as the wind drifted the snow back onto the tracks. The aftermath of the storm was in some ways more challenging than the worst part of the blizzard. In the few days following the most severe snowfall, ranchers tried to assess the damage and cope with the results. They tried to save as many livestock as possible, replenish depleted supplies, and get members of their families to the various communities for medical or other needed
services. The situation was not critical in the Four Corners area. Ranchers there still had horses and sleds which were much more useful in deep snow than the two-wheel drive vehicles or even the four-wheel drive jeeps owned by ranchers in the west country and the Clareton area. According to Earl Christensen, drifts were twelve to fif- teen feet high on his ranch. Travel was mostly accomplished by following the ridges which were windswept and mostly free of snow. Most of the cattle on the Christensen ranch survived, however. They were familiar with the landscape and knew where to go for protection from the wind and snow. According to Jean Sherwin Sears, their ranch lost no cattle for the same reason. Other ranchers were not as fortunate. Christy Smith, who had just moved his cattle to the south ranch from the prairie area north of Newcastle for winter grazing, lost about one hundred head. According to the News
Letter Journal, losses in other parts of Wyoming were greater than they had been in Weston County. In Niobrara County, livestock losses were estimated at about four percent with the area around Van Tassell hardest hit. Losses there were from fifteen to twenty percent of some herds.4

The after-effects of the storm, with temperatures plummeting to forty degrees below zero, took a serious toll on livestock in Campbell County. These figures were reported by Louis Sehilt, of the Wyoming agricultural extension service. The News Letter Journal listed estimated cattle losses in Weston County at that time on the basis of figures from individual ranchers. The estimates
included more than five hundred cattle, including calves, and more than six hundred sheep. 5
The cattle died after they moved along the fence lines and then piled up in the comers. Covered with snow, they suffocated under the drifts. Others died from the extreme cold. Icicles froze over their noses and eyes, keeping them from seeing. Earl Christensen reports seeing dead cattle the entire way from Upton to the Cheyenne River. The losses would have been even greater were it not for the numerous groups and individuals who helped the stricken ranchers. It was a week before many ranchers could get out and get feed for the livestock. A trainload of hay was brought into Newcastle in box cars. The ranchers went to town in caravans so that they could help each other get through the drifts. The National Guard helped with “cats” and rotary plows. The oil companies also had equipment which was utilized to open roads and get to ranches. The U. S. Army Corps of Engineers conducted “Operation Snowbound” and manned a sub-area office in the Weston County Court House. The front page of the News Letter Journal reported, that “Continued snow, cold weather and ground blizzards have hampered opening of roads in Weston County within the last week… roads previously opened are now closed.”6

The problems continued for ranchers many weeks after the original snow. The same issue of the Journal reported that “Much of the hay that comes into Weston County has been trucked in from South Dakota. Truckers have had a very difficult time in getting through on the highways because of the drifting snow.. .a convoy system has been used, in which trucks loaded with hay and other needed ranch supplies follow bulldozers when
opening up the roads.”7

The army operations ended in the county on Wednesday evening, February 23, more than six weeks after the onset of the storm. The News Letter Journal listed the equipment used to keep the roads open in the county during the emergency. “Equipment used in opening the snow in Weston county has included eleven bulldozers, four patrols, one Laternal dozer and three rotary plows. Two of the rotary plows were sent in from Yellowstone Park and Estes Park…A rotary plow belonging to the Wyoming National Guard has been used in the Upton vicinity …companies [help by keeping] the roads open to their drilling operations.”8 Earl Christensen remembers various oil companies had many pieces of equipment that were utilized to help keep roads open.

The ranchers also aided the oil field workers and rode horses to check on the “dog houses” and well locations to be sure that no workers were stranded in the country without supplies. Local pilots were called into service and, according to Earl Christensen, this was the first time he could remember that aircraft were used in an emergency in Weston County. He remembered that Clyde Ice was at the Newcastle airport and that he air-dropped needed medicine to stranded families. Christy Smith had a small plane with skis and used it to help. So did Peter Smith and Gus Sherwin. Christy Smith dropped a set of chains for a car to one rancher. The chain landed fine, but there “wasn’t much left of the sack,” Earl Christensen said. Christy also dropped mail. The drop was so accurate at the Ben Morris ranch that one of the two mail sacks rolled up against the side of the house.

The remains ofthe cattle which perished in the storm did not go entirely to waste as crews came out to the ranches and skinned them. The hides were sold to commercial firms. John C. Christensen had just been elected to the Weston County Commission in the November, 1948, election. He took charge of the emergency operations for the county soon after Joe Watt, commission chairman, rode a horse into Moorcroft and from there telephoned, informing Christensen of his appointment to the job. The county relief board was composed of
Christensen, Wyoming Highway Department project engineer H. J. Mitchell, county agent Garth Percival, and Red Cross representative Jennie Kirkwood.

Few country homes had telephones in those days and the few that did had no service because many of the lines blew down. The county relief board took on the job of keeping people informed about the conditions throughout the county. Operations directed by this and other government agencies brought relief to the people and live- stock keeping the losses to a minimum in Weston County.