Suspect in Custody After Shooting at Officer, Taking Hostages in Box Elder 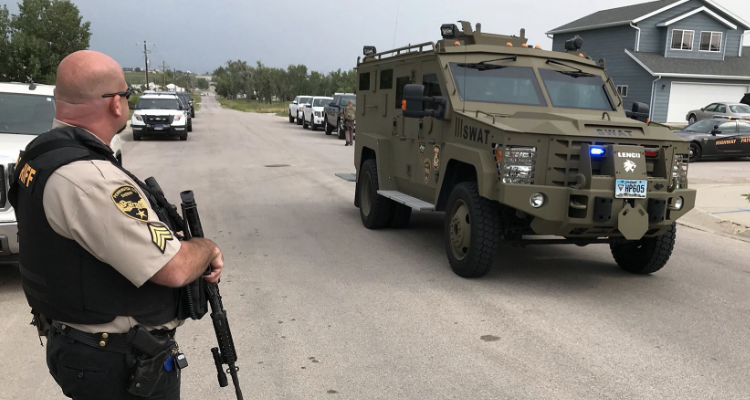 Suspect in Custody After Shooting at Officer, Taking Hostages in Box Elder

Pennington County, SD.    –  Box Elder Police Officers responded to a report of a man screaming in the area of Ruhe Lane at around 9:30 a.m. Tuesday morning (Aug. 14). Police officers made contact with the man in the 300 block of Freude Lane where the male fired a handgun at an officer who returned fire. The man then fled into a nearby yard and took two people hostage at gunpoint for a short period of time. Box Elder Police closed in on the home and the suspect ran away, allowing both hostages to escape.

The Rapid City/Pennington County Special Response Team was mobilized as law officers narrowed the search to four houses. Pennington County patrol deputies rescued a young girl from the second story of the home where the suspect was eventually arrested.
After speaking with SRT negotiators, Justin Grant Littrell, 31, from Yankton, South Dakota, surrendered and was safely taken into custody about noon. No one was injured.

Law officers will recommend appropriate charges potentially including attempted murder, kidnapping, burglary, aggravated assault, and other firearm charges. Littrell has outstanding warrants for driving under the influence, second degree burglary and grand theft and is a parole absconder.

This investigation into this incident is on-going, and charges are pending.