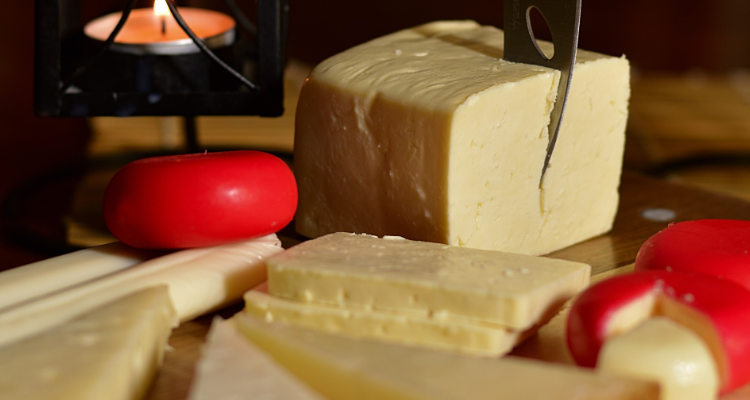 Cheese is one of our nation’s favorite comfort foods. From pizza and burgers, to tacos – cheese is on almost anything in America where the flavors compliment.

While the U.S. leads the world in cheese production, it might be surprising to learn that Americans do not consume the most cheese per capita. Actually, the U.S. doesn’t even break the top 15, but, that doesn’t mean that we don’t eat cheese, or love cheese.

If you’re wondering about the discrepancy between the consumption and production in the U.S., the culprit is likely the 1.4 billion pound surplus of American, Cheddar, and Swiss cheese currently sitting in cold storage. It may also rest on American citizens only eating an average of 15 pounds of natural cheese per person annually, and a steady, though declining, American reliance on processed cheese food.

It’s worth noting that some of the countries topping the consumption list actually eat natural cheeses with every meal and even sometimes between meals.

While these tidbits are interesting, we wanted to take our discussion of cheese a bit further today, and cut a little deeper into the 7,000 plus year history of cheese, in honor of National Cheese Day.

Since cheese making actually predates recorded history, it’s a bit tough to pinpoint the exact details surrounding its origin. Experts do believe, however, that cheese making likely began sometime around 7,200 years ago.

Despite not knowing an actual time or place, we do know, the art of cheese making is referred to in ancient Greek mythology and has been found on Egyptian tomb murals. There was also evidence of a cheese called “Rushan” having been produced in China since the time of the Ming Dynasty. some of the earliest evidence of cheese was found in Sumerian cuneiform texts of third Dynasty of Ur, dating back to the early second millennium B.C.

So, who could have made the first cheese? According to an ancient legend, it was made accidentally, by an Arabian merchant. The merchant was said to have put his supply of milk into a pouch made from a sheep’s stomach, before setting out on a day’s journey across the desert. The rennet in the lining of the pouch, combined with the heat of the sun, would have caused the milk to separate into curd and whey.

Other possible origin stories for cheese stem from the practice of salting curdled milk for preservation purposes, and adding fruit juices to milk resulting in curdling.

Either way, making cheese eventually became the best way to preserve milk in the millennia before refrigeration.

Cheese making had become a widespread, by the time of the Roman Empire. A highly valued process practiced throughout Europe and the Middle East. By the time of Julius Caesar, literally hundreds of varieties of cheese were being produced and traded across the mighty Roman Empire and beyond.

It was the Romans who first introduced cheese making to England. While travelers from Asia were believed to have brought the art of cheese making into Europe.

Once cheese making spread into the cooler climates of northern Europe, less salt was needed for preservation, which led to the introduction of creamier, more mild cheese varieties. Europe was also home to the invention of aged, ripened, and blue cheeses, like Gorgonzola, which was first made in the Po valley in Italy in 879 A.D.

Many of the popular cheeses we eat today, such as cheddar, Swiss, Parmesan and Gouda, are relatively new to cheese history and all appeared within the last 500 years.

During the middle ages – from the decline of the roman empire until the discovery of America – cheese became an established food across Europe, and cheese making continued to flourish. Monks in the monasteries of Europe would continue making and improving upon cheese.

Pilgrims would later included cheese in the Mayflower’s supplies when making their voyage to America in 1620. English Puritan dairy farmers would bring their knowledge of dairy farming and cheese making with them from the old world to the new English colonies.

The making of cheese spread quickly in the new world, but, yet it remained a local farm industry until closer to the 19th century.

The first industrial factory for the production of cheese was opened in 1815 in Switzerland. In America. large-scale production of cheese would find real success and growth 35 years later. Credit goes to Jesse Williams, a dairy farmer, who established the first assembly-line cheese factory in Oneida County, New York.

Mass-produced rennet began in the 1860’s and by the turn of the century, scientists were producing pure microbial cultures to standardize and improve the safety cheese. Meanwhile, at home, ceramic cheese dishes, and cheese bells became one of the most common ways to prolong the life of cheese until the introduction of the home refrigerator in 1913.

Factory-made cheese overtook traditional cheese-making in America during the era of World War II, and processed cheese products skyrocketed in popularity at that time.

Since that time, Americans consistently consumed more processed cheese than natural cheeses, but the tides are turning, with many Americans and pizza makers now preferring the natural cheese mozzarella and Italian blends.

As population across the United States grew dramatically, so did the demand for cheese. The industry gradually moved westward, centering on the rich farm lands of Wisconsin. In 1845, a band of Swiss immigrants settled in Green County, Wisconsin and started manufacturing foreign cheeses, Swiss, Brick, and Limburger in America. Most Wisconsin farmers began to believe that their future survival was tied to cheese.

Wisconsin’s leadership in dairying and cheese making continues today with 11,000 dairy farms and 1.27 million cows producing over 20,000 pounds of milk annually. Of that milk supply, between 90 and 95 percent is used only for the production of cheese!