The History of the Jelly Bean 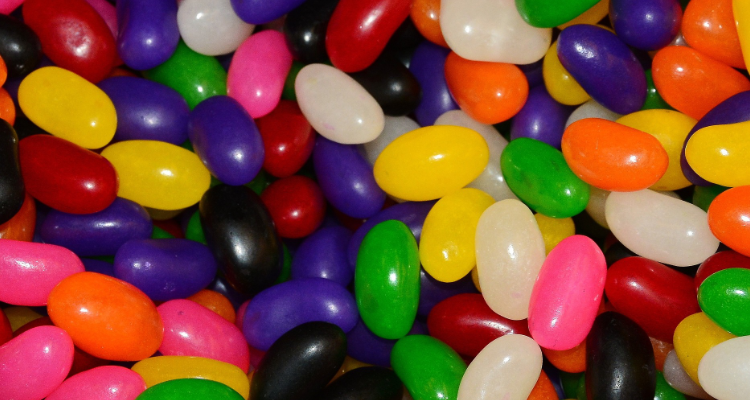 The History of the Jelly Bean

What is a jelly bean made of?

Because jelly beans are candy, they are of course primarily made from sugar and corn syrup. Starch is added as a thickening agent to form the texture of the gelatinous center. Over which a thin, hard sugar coating is added to create the surface.

These simple ingredients combine to form the perfect blank canvas for a wide-variety of natural and artificial flavors, and vast array of vibrant colors!

No one really knows the exact origins of the jelly bean or when they were invented. They are generally believed to be an American candy but that cannot be proven. The thing that is certain, however, is that jelly beans are believed to be derived from a combination of two classic candies, the Turkish delight, and Jordan almonds.

The Turkish delight is a Middle Eastern jelly confection covered in powdered sugar. It is likely that the chewy filling of the jelly bean was inspired by the texture of this candy.

Origins of Turkish delight are traced back to the 18th century and Turkish confectioner, Bekir Effendi. Some suggest that Turkish delights could have even been a popular candy during Biblical times.

Turkish delights made an appearance in the text of C.S. Lewis’s ‘The Lion, the Witch, and the Wardrobe, as the sugar-powdered candy that was Edmund’s downfall.

The hard shell outside of the jelly bean is said to have been inspired by the hard-shell coating of the popular wedding candy, Jordan almonds.

Jordan almonds gained steam in the 15th century, after sugar was introduced to European kitchens. Here, French confectioners would coat the almonds in a shiny sugar shell. The method is called panning. During the process, 30 different layers of sugar syrup are applied on top of each other. This was originally achieved by slowly rocking the almonds in a pan filled with sugar syrup until the almonds were fully coated.

Who was responsible for birthing the idea of the jelly bean, combining the chewy, squishy center of a Turkish delight with Jordan almond’s hard sugar shell? No one knows for sure.

We do know that jelly beans were a common penny candy in store jars by the early 1900s, and that they were common enough to appear in the dictionary by 1905. By 1915, “jelly bean” had even been made into slang terminology, describing a weak or worthless male.

We also know that the candy was being advertised in the United States, during the time of the Civil War.

The first known reference to jelly beans in the U.S., appeared on advertising for Boston candy maker, William Schrafft, promoting the jelly bean. These ads prompted families to send bags of the bean shaped treats to Union soldiers. It wasn’t a bad strategy, as the mini-candies did hold up to travel so much better than chocolate.

Why the bean shape?

Perhaps the bean shaped candies came from Schrafft’s connection to Boston. the city has long been known as bean town due to baked beans being an incredibly popular dish in colonial Boston. or, perhaps the shape arose from an affinity of confectioners of the period to make treats in vegetable shapes. After all, the diet of a majority of Americans of the time was dominated by homegrown vegetables and beans.

Growing the popularity of Jelly Beans

Jelly beans became a popular penny candy, found in glass jars in general stores far-and-wide, to the delight of many children looking to spend their hard-earned pennies. The popularity was also likely due, in part, to the advantage that the jelly bean held over some of its competition. It didn’t melt down, it retained its shape, and they didn’t stick together like other candies when packed into a jar.

Finally, by the 1930s, jelly beans began being marketed as traditional Easter candies, likely in part to their bright colors and egg similar shape.

In the mid-1960’s jelly beans would again experience another boost in popularity. This time, it would last well into the 1980’s. When Ronald Reagan began a campaign for Governor of California, he used the candy to help avoid a pipe smoking habit. From the time he was elected Governor, and all the way through his Presidency, word would get out that he loved the flavorful candy bean.

A boost in flavor

In 1965 the California-based Herman Goelitz Candy Company (which would later become known as Jelly Belly) began an attempt to re-invigorate the reputation of the jelly bean with an infusion of flavor. They would also choose to alter the color of the beloved candy, but would retain the distinctive bean shape.

These special jelly beans would explode into an array of 40 flavors by the 1980’s, when a magazine photographer covering Reagan captured a photograph revealing the brand of jelly bean Reagan preferred – Jelly Belly’s.

Today there are more than 100 different flavors in the company’s line of jelly bean.