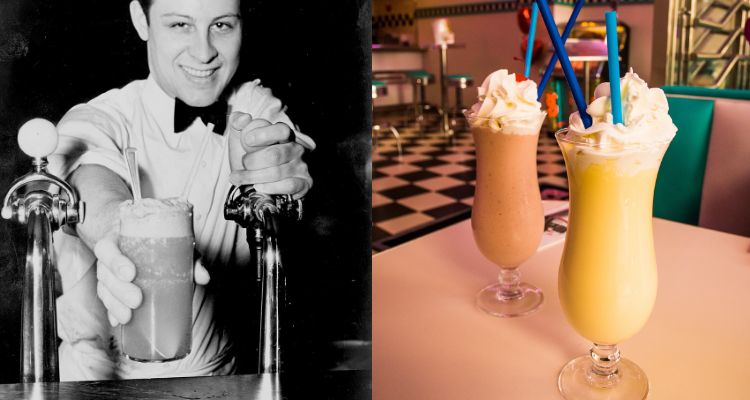 June 20th is National Ice Cream Soda Day and Vanilla Milkshake Day. On the surface, these two cold and creamy dessert drinks seem to embody distinct identities, but in their infancy, both the ice cream soda and the milkshake were a lot more similar than they were different. Interestingly, the creamy common connection between them, the ice cream, wasn’t even part of the equation at the time, despite gaining wide-spread popularity alongside each other at street markets and fairs. Read on to get the frosty scoop on the somewhat surprising origins of both the ice cream soda and the milkshake.

The Backstory of the Ice Cream Soda

Ice cream sodas began their existence as more of a cream-soda, if you will, containing only flavored soda water and sweet cream. They were popular in street markets and fairs alongside ice cream. Understanding this basis better prepares us to lead into what is most commonly considered to be the origin story of the ice cream soda.

The year was 1874, the location Philadelphia, Pennsylvania, at the Franklin Institute’s Semicentennial Celebration. There a concessionaire, named Robert M. Green, was selling soda drinks from a dispenser, earning $6 a day. While Robert would begin the exhibition serving his popular combo of sweet cream, and flavored soda water, he would end the exhibition having turned both his business, and soda fountain history around forever. The story goes, that Green encountered a problem in the early days of the event, when he ran out of cream. Not wanting to lose business to competing soda-water vendors down the way, he made a decision to substitute vanilla ice cream for cream after watching people pass by eating ice cream.  The legend tells us that the switch proved to be a huge hit with customers, helping Robert raking in over $600 a day for his new creation by the end of the celebration!

There is another first-hand account of the origin of the ice cream soda, one which is likely more reliable, and less embellished. This story suggests that Green didn’t create the ice cream soda out of necessity or by accident, but out of invention. As a predetermined way of making his soda fountain stand out from others at the exhibition, Green stumbled upon his idea at a confectionery, where he observed people eating ice cream along with a glass of plain water on the side. Deciding to combine the flavored soda water and ice cream into one sweet and creamy drink, Green was said to have come up with 16 different ice cream soda combinations to serve at the upcoming Franklin Institute celebration.

No matter which story you believe, Robert Green is widely considered to be the originator of the ice cream soda, and went on to make a fortune as a soda manufacturer. It’s a fact that is even inscribed on his tombstone, “Robert Green: Originator of the ice cream soda”. He would also inspire the popular trend of soda fountains and soda jerks throughout the over-half century that followed.

The Backstory of the Milkshake

In the late 1800’s the early milkshake was made a lot like many fast food restaurants make them today, without any ice cream.  At the time the milkshake was simply malted flavored milk which occasionally contained added cream. The shake part came from the fact that the drink was shaken and not blended, at least until advanced blending methods came into being.

To further differentiate the two sweet treats, the milkshake was, prior to the turn of the 20th century, an exclusively alcoholic drink made with whiskey. It was also said to be fashioned more like eggnog, than the milkshake we know of today.

The evolution of milkshakes would happen by the turn of the 20th century, leaving behind their alcoholic nature in favor of a variety of flavors. Flavored syrups, such as vanilla, chocolate, or strawberry would become widely used favorites when combining milk, malt, and ice cream into the blended treat. The invention of the electric blender would be the tipping point for the popularity of milkshakes at soda fountains across the globe.

By the 1950’s, milkshakes had become prevalent in diners, lunch counters, soda foundations, and burger joints. Almost every single one of them had a milkshake mixing machine of some kind, and served milkshakes to eager patrons in tall glasses.

The Creator of the Milkshake

Ivar “pop” Coulson is credited as making one of the first ‘modern’ milkshakes by adding two scoops of vanilla ice cream to the standard malted milk drink recipe. Sold under the name of “Horlick’s Malted Milk”, the sweet treat was featured at Walgreens drugstores soda-fountains.

Today, there are innumerable variations of ice cream sodas and milkshakes that can be made by changing the flavors of either the ice cream, the syrups, or the soft drinks. No matter who you credit with their respective creations, or which of the origin stories you think sounds legit, no-one can discredit the longevity or legacy of two of the most popular dessert treats!

Whether you know the ice cream soda as a “coke float”, “Boston cooler”, “spider” or “brown cow” or identify the milkshake as “frappe”, “velvet”, “malt”, or ”frosted drink,” let’s all agree that there is never any better time than the present to celebrate these timeless ice cream based treats!