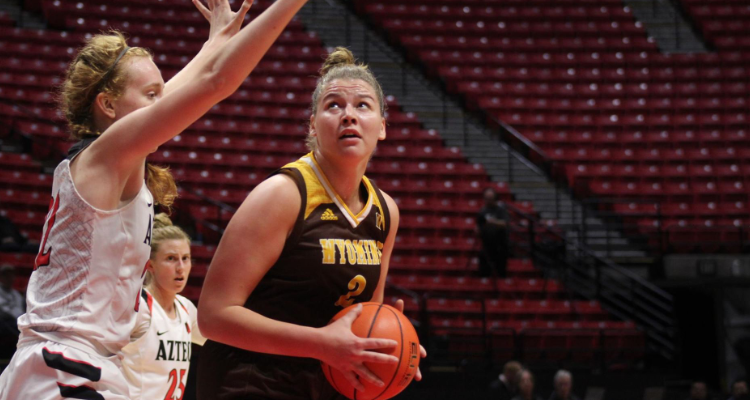 SAN DIEGO, Calif. – Sophomore Tereza Vitulova scored a career-high 28 points, but it wasn’t enough as the Cowgirls dropped a 67-60 overtime contest on the road to San Diego State. The Aztecs (8-9, 3-2 MW) scored a game-tying three pointer with 4.7 seconds to play as Wyoming (7-7, 3-2 MW) has now dropped two-straight league games.

“If you think about the start of the third quarter, we actually scripted four plays we wanted to run,” Mattinson said. “We got the ball where we wanted, to the person we wanted, and all of a sudden, we just couldn’t score. It stopped. I told them after the quarter, ‘the good news is, we’re still in the game. The bad news is, we only scored four points.’ Then, we turn around in the fourth quarter and score 20.”

Vitulova scored her 28 points on 13-of-23 shooting from the field, and those 13 makes are a career high. Vitulova also grabbed six rebounds and had a pair of steals. Her previous career high was 25 points scored against North Dakota State last November. Vitulova has now reached double-digit scoring 11 times this season and 16 times in her career. It is also her third 20-point game this season.

Sophomores Alba Sanchez Ramos, Karla Erjavec and Quinn Weidemann each scored seven points to round out UW’s scoring. Sanchez Ramos had a career-high nine boards and a career-high five assists to go along with a steal. Erjavec dished out a team-best six assists and grabbed a pair of boards. Weidemann also had a rebound and steal to her name.

The Aztecs were led by Zayn Dornstauder’s 18 points and six rebounds off the bench. Monique Terry had 14 points and seven rebounds, while Tea Adams had 10 points and a game-high seven assists.

Vitulova started the game on a personal 7-0 run, scoring a pair of layups and three before the Aztecs got on the board. The Aztecs made a trio of three-point field goals to make cut Wyoming’s lead to 11-8, but Weidemann answered with a three of her own to pad the lead. After a Vitulova layup on the fast break, the Aztecs scored seven of the last 10 points of the quarter, and UW led 19-15 after 10 minutes of play.

Sanchez Ramos scored in close to start the second quarter, but the Aztecs converted a pull-up in the paint to respond. Vitulova scored on two straight possessions to put UW up 25-17 with 6:19 to play in the half. After a quick 4-0 run by the Aztecs, Weidemann scored a pair from the free throw line to put UW up 27-21. Rusk ended a 3:51 Cowgirl scoring drought with a corner three with 42 seconds to play in the half, and UW took a 30-23 lead into the locker room.

The Aztecs scored from three to start the second half, and Vitulova scored in the paint to open UW’s scoring and make it 32-26 with 7:47 to play in the quarter. The Aztecs used a 5-0 run to cut Wyoming’s lead to one, 32-31, with 2:52 to play, as Wyoming was in a 4:57 scoring drought due to missing seven straight field goals. San Diego State took its first lead of the game on an and-one play, 34-32, with just 2:42 to go in the third frame. Vitulova finally ended SDSU’s 10-point run with a layup, but the Aztecs still lead 36-34 after three quarters.

Weidemann opened the final frame with a jumper at the elbow to tie it up at 36, but a pair of Aztec free throws gave SDSU the two-point lead right back. After a Vitulova layup, the Aztecs scored a three to make it 41-38 for the home team. After the teams traded shots, an Erjavec three tied it at 43 with 7:24 to go. San Diego State scored a long two and called timeout, leading 45-43 with 6:51 to play.

Out of the break, SDSU extended its lead with a driving layup before Rusk scored in the paint to make it 47-45. Erjavec tied the game with a running floater in the lane with just 3:55 to go, and Rusk scored a trey on Wyoming’s next possession to give UW the lead back, 50-47 with 3:18 to play. Sanchez Ramos drilled a three to make it a 10-0 run for the Cowgirls, but the Aztecs snapped the run with a layup to make it 53-49 for Wyoming with 2:14 to play.

An Aztec layup cut the lead down to just two points, and after a missed Erjavec layup, SDSU called timeout with 25.7 seconds to play. The Cowgirls defended SDSU’s three point attempt, and with 10.3 seconds to play, Vitulova scored a free throw to make it 54-51, and the Aztecs called timeout. After the stoppage, SDSU hit a three as the buzzer sounded to send the game to overtime.

Vitulova scored first in overtime with a layup, but the Aztecs answered on the other end with a 7-0 run to go up 61-56 with just 1:44 to play. Vitulova ended the run with a putback off an offensive board. With 39 seconds to play, the Cowgirls fouled SDSU, and the Aztecs scored both to go up 63-58. The Aztecs were strong from the free throw line down the stretch and pulled out the 67-60 win.

The Cowgirls will return to the hardwood on Saturday, Jan. 11, when they face off against UNLV on the road at 4 p.m.