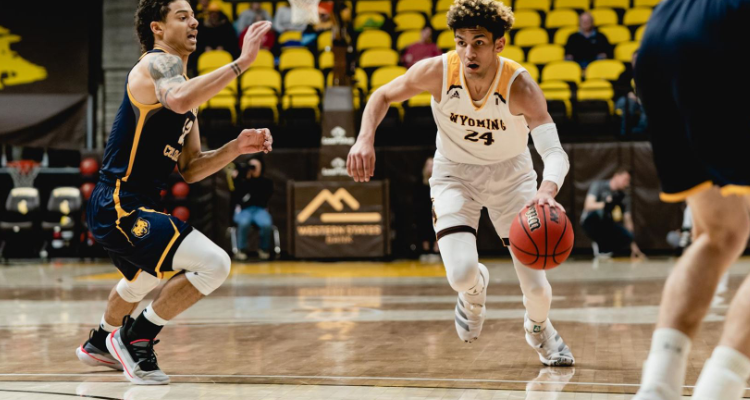 LARAMIE, Wyo. | NICK SEEMAN – Despite shooting a season-high 60 percent in the opening frame, the Wyoming Cowboys could not overcome the three-point shooting of Northern Colorado in a 74-53 loss on Saturday evening in the Arena-Auditorium.

“What I shared with the team after the game and at halftime was being executer of the game plan,” Wyoming head coach Allen Edwards said. “We knew they shoot the three ball a lot and we wanted to limit their attempts, but they got up some shots. We shot well in the first half and we attacked the rim, but in the second half early turnovers made it a quick momentum shift and we played from behind.”

The Pokes were led in scoring by redshirt sophomore Hunter Maldonado at 17 points. He has scored in double-figures in every game this season and in 17 of his last 19 games dating back to last season. Senior A.J. Banks added eight points for the Pokes along with three rebounds. Sophomore Hunter Thompson added seven points and led the team with eight rebounds.

The Cowboys shot 44.4 percent from the field for the night. The Bears countered at 47.3 percent and knocked in 11 threes. UNC came into the game ranking second in the nation in threes per game.

A balanced attack early by the Pokes saw Wyoming build a 9-8 lead thanks to back-to-back buckets by Taylor. The Bears, one of the nation’s top three point shooting teams hit a pair of three pointers early.

The Pokes would shoot 67 percent from the field and take a 17-15 lead with 11:45 left in the first frame. Mueller added six-straight points for the Pokes in the tightly contested opening eight minutes.

The Bears would hit their fourth three of the half to build the largest lead of the game to that point at four for 27-23 with under six minutes left. Northern Colorado would build the advantage to six points and hit a buzzer beating shot to take that lead into the half 40-34.

The Bears opened the first half on a 7-2 run to make it a 47-36 game three minutes into the second half. Thompson would pull the Pokes within single digits on two occasions, but the three ball would lift the lead back for the Bears. Trent Harris hit a triple and got fouled missing the shot to make it a 59-46 game with 11:10 remaining.

The Bears would hold the advantage and held the Pokes to 1-of-8 from the field in the final five minutes of the frame to take the 74-53 win for their third-straight win over the Cowboys.

The Bears were led in scoring by Jonah Radebaugh at 24 points. Harris, a three point specialist, added 12 points for the Bears connecting on four triples for the night.

The Cowboys return to action on Wednesday hosting Utah Valley in the Arena-Auditorium for a 7 p.m. start.