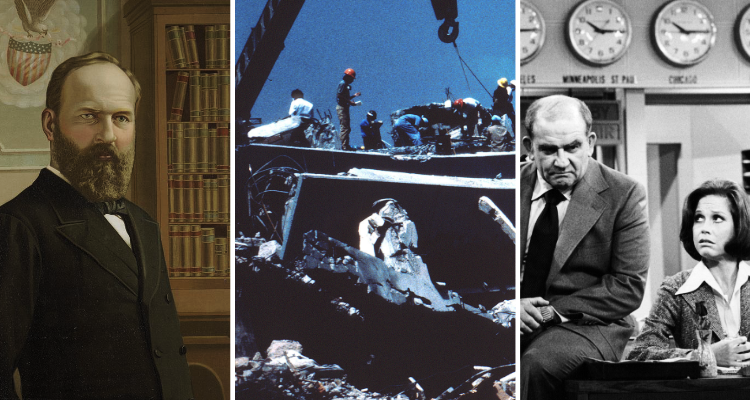 Here’s what happened across history on September 19th:

On Sept. 19, 1881, the 20th president of the United States, James A. Garfield, died 2½ months after being shot by Charles Guiteau; Chester Alan Arthur became president.

In 1777, the first Battle of Saratoga was fought during the Revolutionary War; although British forces succeeded in driving out the American troops, the Americans prevailed in a second battle the following month.

In 1783, Jacques Etienne Montgolfier launched a duck, a sheep and a rooster aboard a hot-air balloon at Versailles in France.

In 1796, President George Washington’s farewell address was published. In it, America’s first chief executive advised, “Observe good faith and justice toward all nations. Cultivate peace and harmony with all.”

In 1934, Bruno Hauptmann was arrested in New York and charged with the kidnap-murder of 20-month-old Charles A. Lindbergh Jr.

In 1945, Nazi radio propagandist William Joyce, known as “Lord Haw-Haw,” was convicted of treason and sentenced to death by a British court.

In 1959, Soviet leader Nikita Khrushchev, in Los Angeles as part of his U.S. tour, reacted angrily upon being told that, for security reasons, he wouldn’t get to visit Disneyland.

In 1982, the smiley emoticon was invented by Carnegie Mellon University professor Scott E. Fahlman, who suggested punctuating humorously intended computer messages with a colon followed by a hyphen and a parenthesis as a horizontal “smiley face.” 🙂

In 1985, the Mexico City area was struck by a devastating earthquake that killed at least 9,500 people.

In 1986, federal health officials announced that the experimental drug AZT would be made available to thousands of AIDS patients.

In 1997, in his first public comments since the death of Princess Diana, Prince Charles told the British people he would always feel the loss of his former wife, and thanked them for their support. Six people were killed when an express passenger train and a freight train collided in west London. The crime drama “L.A. Confidential” was released by Warner Bros.

In 2004, Hu Jintao became the undisputed leader of China with the departure of former President Jiang Zemin from his top military post.

Ten years ago: Struggling to stave off financial catastrophe, the Bush administration laid out a radical bailout plan calling for a takeover of a half-trillion dollars or more in worthless mortgages and other bad debt held by tottering institutions. Relieved investors sent stocks soaring on Wall Street and around the globe.

Five years ago: Signaling a dramatic shift in Vatican tone, Pope Francis said in a published interview that the Roman Catholic church had become obsessed by “small-minded rules” about how to be faithful and that pastors should instead emphasize compassion over condemnation when discussing divisive social issues such as abortion, gays and contraception.

One year ago: In a speech to the U.N. General Assembly, President Donald Trump vowed to “totally destroy North Korea” if the U.S. were forced to defend itself or its allies against the North’s nuclear weapons program.