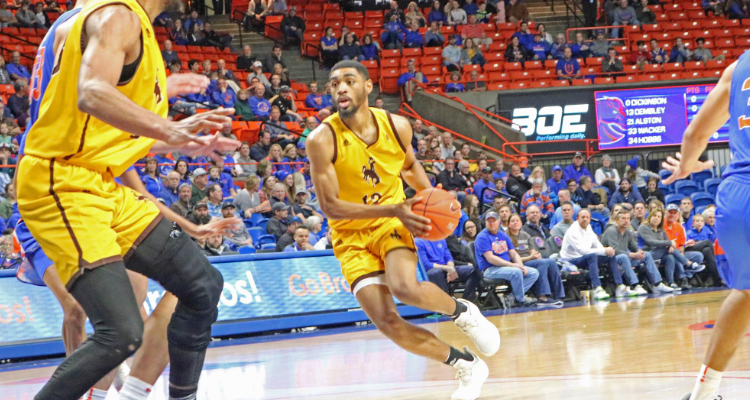 BOISE, ID. – The Wyoming Cowboy offense struggled with a season-high 24 turnovers in a 77-52 loss to Boise State inside Taco Bell Arena in Boise, Idaho on Saturday afternoon. The 52 points by the Brown and Gold was a season low. The Pokes fall to 5-15 overall and 1-6 in the MW with the Broncos improving to 9-11 overall and 4-3 in the conference.

“In the first half we did a good job defending, but we struggled on the offensive side of the floor,” Wyoming head coach Allen Edwards said. “We came out assertive to open the second half and had good mojo. Boise State stayed the course fighting hard and we need to have better consistency and effort.”

The Cowboys shot 40 percent from the field going 17-of-43. The Pokes shot 52 percent in the second half after opening the game 6-of-22 in the first 20 minutes. Boise State one of the most efficient shooting teams in the conference shot 45 percent. The Bronco also owned a 34-22 advantage on the glass.

“Every possession counts in the slowed pace that we play,” Edwards said. “We need to cut and space out better and be ready to shoot the basketball moving forward.”

Wyoming was led in scoring by redshirt freshman Hunter Thompson, as he added 19 points for his eighth game in double-figures this season. He was 6-of-8 from the field. Freshman Trevon “TJ” Taylor added 10 points for his fifth game in double-figures this season. Senior Justin James was held to only seven points, but grabbed a team-high six rebounds. Freshman walk-on Haize Fornstrom added a career-high five points.

After a slow start for both teams offensively Derrick Alston and Alex Hobbs hit baskets back-to-back to give the Broncos an early 5-0 lead in the opening three plus minutes. The run was halted by a layup from Thompson.

Boise State would follow that up with an 8-2 run, as Hobbs lead the way to build a 13-4 lead with under 12 minutes to play in the half. Wyoming opened 2-of-12 from the field. Thompson stopped the run once again for his sixth point of the game for a 13-6 contest halfway through the frame.

Wyoming’s struggles would continue with eight turnovers and a field goal percentage of 26 percent, as Boise State would build the lead to 22-10 with 2:44 left in the first half. The Broncos would build the lead to 18 points at 28-10 with a minute left, but Banks added a pair of free throws and a fast break layup for a 28-14 game heading into the break.

Taylor added four-straight points to open up the second half to make it a 28-18 game one minute into the frame. Senior Jordan Naughton would follow Taylor’s script and made it a seven point game at 31-24 with 17:29 left in the game.

Wyoming would go on a run of 4-of-5 from the field, but Boise State countered with a 14-0 run to build the lead to 63-34 advantage. The Broncos would ride that momentum to the final buzzer taking the contest and the season series.

The Broncos were led in scoring by RJ Williams with 18 points. He went 7-of-8 from the field. Marcus Dickinson added 12 points going 4-of-8 from behind the arc.

Wyoming returns home on Wednesday hosting Fresno State in the Arena-Auditorium for a 7 p.m. start.