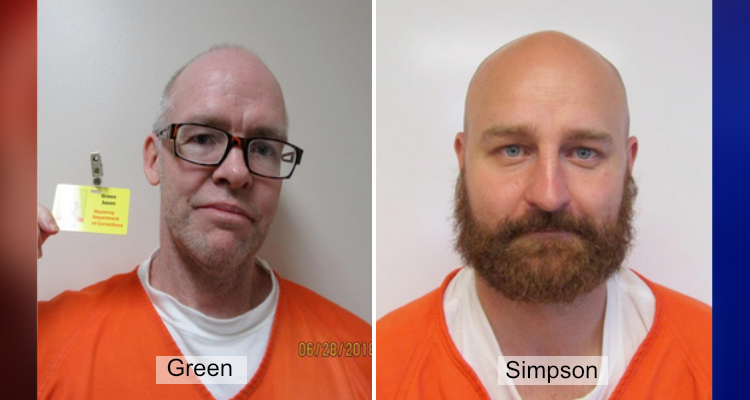 NEWCASTLE, WY. – The two inmates that escaped from the Wyoming Honor Conservation Camp are still on escape status as of September 24, 2019. Sources have verified that a vehicle was stolen from the City of Newcastle the night of the escape. The vehicle description is a 2002 Ford 150 extended cab work truck, tan in color with a white flat bed and tool boxes on the sides. The vehicle has a yellow mini light bar on the roof and unit #71 on the cab on both sides near the doors.

Wyoming Department of Corrections Director Robert O. Lampert, who is on site at the institution, stated, “Our Department, along with the Newcastle Police Department and Weston County Sheriff’s Office continue to actively investigate this incident.  We will provide more information as soon as it’s confirmed. Public safety remains our top priority, and we’re committed to apprehending these individuals as quickly and safely as possible.”

Inmates Jason Green and Robert Simpson were discovered missing from the Wyoming Honor Conservation Camp in Newcastle, Wyoming as of 10:30 pm on Sunday, September 22 nd , 2019.

Green is 5 foot, 10 inches, approximately 170 lbs, white, gray hair and blue eyes. He is 48 years old and was last seen wearing brown tortoise-shell eyeglasses. He has no distinguishing scars or tattoos.

Simpson is five foot, ten inches, approximately 165 lbs, blond hair and blue eyes. He is 30 years old. He has a scar on the bridge of his nose, on right forearm, and on the left hand. He has a tattoo of a domino and hell cat on his right arm with other tattoos on his chest, abdomen and back. He was last seen with a beard and sometimes has black eye glasses.

Updated photos are attached. Anyone with information as to the whereabouts of the inmates is asked to contact local law enforcement.

It is believed the inmates left the facility with a black lab mix dog. Inmate Simpson was assigned to the Project Love Dog Program prior to his escape.