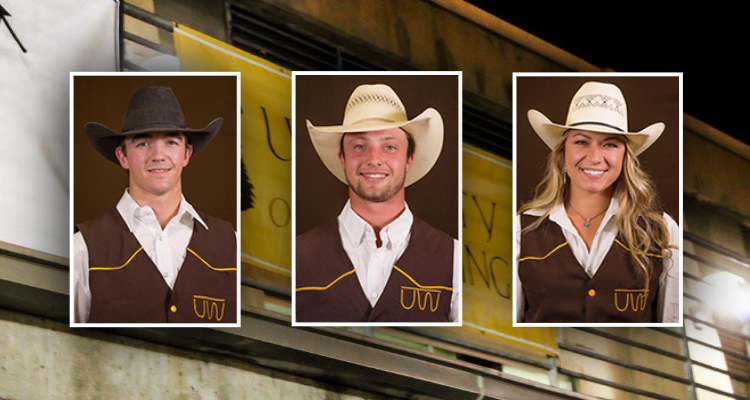 LARAMIE, WY.  –  Just think if the University of Wyoming could keep all its results from its entire roster, and not just those selected for the weekly points team. If that were the case, the Cowgirls and Cowboys would run away with the regional title this season.

Five UW team members scored 100 or more individual points to lead the Cowboys to their first title of the fall season with just one more event left on the Central Rocky Mountain Region (CRMR) schedule until spring. The Pokes rolled to a season-best 730 points at the Lamar (Colo.) Community College rodeo last weekend. It is the most points since the Cowboys scored a team-record 855 points a year ago at the Central Wyoming College rodeo.

Season leader Casper College finished second to the Cowboys with 680 points. The UW win solidified its second place in the CRMR standings with 2,150 points with just the Laramie County Community College rodeo left on the fall season this weekend in Cheyenne. Casper College heads the regional pack with 2,455 points. The T-Birds and Cowboys are making it a two-team race for the top CRMR positions heading into the spring season.

Gillette College is third with 1,345 points.

After two straight wins in the region, the Cowgirls placed a close second at Lamar, scoring a season-low 220 points, but it was only 20 points back of front-running Eastern Wyoming College. Despite the low points total, the Cowgirls increased their overall regional lead with 1,458.33 points, while Casper College is second with 1,033.33 points. Gillette College is a distant third with 780 points.

Coach Beau Clark was pleased with both his teams’ performances over the weekend, especially the men, who won for the first time this season. However, he pointed to the fact that more than 30 team members made Sunday’s short go in all six men’s and four women’s events.

Only six men and four women are selected for the points team at each rodeo, and those 10 accumulate points for their respective clubs. However, non-points team members can compete as individuals in the weekly CRMR events.

Even though the UW men’s team did not produce an individual champion from the points team, the depth proved to be an asset during the weekend, as all six men contributed to the club winning for the first time this season.

Transfers Houston Brown, of Miles City, Mont., and Austin Hurlburt, of Norfolk, Neb., paced the Cowboys, scoring nearly 350 points each in two separate events. Brown was third in the saddle bronc average and fifth in team roping with Hurlburt, who also was fourth in the calf roping average.

Jase Staudt, from Nathrop, Colo., had the highest individual finish among the six-man points team, finishing as the team roping runner-up with partner Bryan Lemmon, of Casper College.

Both Caden Camp and Seth Peterson added 100 points each to the Cowboys’ team total. Camp, from Belgrade, Mont., was third in the calf roping average and added points in steer wrestling. Peterson, from Minot, N.D., took the short go in steer wrestling to place fourth in the average.

All 220 team points came from just two points team members for the Cowgirls.

Transfer Jacey Thompson, of Yoder, placed in two of the women’s events. She was fifth in the goat tying average and then was sixth in breakaway roping to account for 80 points. Teammate Casey Reimler, from Rozet, had the weekend’s best showing, winning the breakaway roping short go to wind up second in the average for a total of 140 points.

Several non-points team members also performed well for both the Cowboys and Cowgirls:

For the Cowgirls, Karson Bradley, of Big Piney, was the top barrel racer, and teammates Rachael Calvo, of Bassett, Neb., and Kelsey Lensegrav, of Interior, S.D., were fourth and sixth, respectively. Faith Hoffman, from Kiowa, Colo., placed fourth in goat tying.