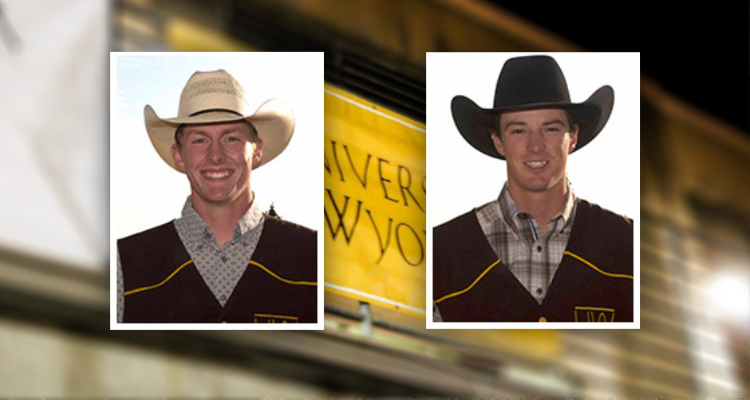 LARAMIE, WY. – For much of the spring rodeo season, it has been almost a given that the University of Wyoming men’s team would win the Central Rocky Mountain Region (CRMR) championship. For the women, it has been a wait-and-see approach.

The Cowboys continued their seasonlong torrid streak, winning their sixth team title in nine fall and spring rodeos by taking Casper College’s annual Ropin’ and Riggin’ Days Rodeo with another dominant performance over the weekend. The Pokes received production from all six points team members en route to a team-leading 665 team points to outpace runner-up Gillette College by 215 points.

That team win now puts the Pokes’ season total to a dominating 4,785 points, easily outdistancing Gillette College by 1,619 points. The Pronghorns overtook two-time CRMR champion Sheridan College for the coveted second-place position in the region, with a slim 21.66-point lead over the Generals.

For UW’s rodeo programs, the only suspense left heading down the regional finish line was if the Cowgirls could rebound to claim the women’s title the same season as the men. It has been 13 years since both clubs claimed team honors the same season.

With just one rodeo remaining on the schedule — this weekend’s 70th annual Laramie River Rendezvous Rodeo — the UW women had their first total team effort since last semester in rolling to the Casper College team title. It was the Cowgirls’ second straight rodeo victory to give the Cowgirls the overall team lead.

The UW women, who haven’t had the team lead since the second-to-last rodeo late last fall, now have 2,445 points to overtake Eastern Wyoming College (EWC) by 151 points. The Lancers have 2,294.83 points, while Gillette College is third at 2,220 points and is still in contention for either the first or second place position. The Pronghorns trail the Cowgirls by 225 points.

“It was a great weekend for UW rodeo,” first-year Coach Beau Clark says. “I was proud of the way all of the athletes in the program performed.”

In rolling to the Ropin’ and Riggin’ Days team title, the Cowboys received production from all members of the points team, with two individual event winners and two runners-up.

Seth Peterson, the region’s all-around points leader, won the tie down roping event, placing third and second in both rounds to take the average. The Minot, N.D., junior also added 20 points in steer wrestling, giving him 170 individual points toward the team’s output.

Nathrop, Colo., junior Jase Staudt returned to the winning side when he won the short go of team roping with UW partner Dusty Taylor, from Craig, Colo. The pair’s fifth-best time in the opening round was good enough to give them the average.

In all, UW team ropers accounted for 470 points of the Cowboys’ team total. The final 25 UW team points came from Helena, Mont., junior Ty Everson with 25 points. He placed sixth in the tie down roping average.

Just like their male counterparts, the UW Cowgirls also had all points team members score over the weekend when the four-member contingent scored in all three women’s events.

Sophomore Rachael Calvo, from Bassett, Neb., rang up 140 points in barrel racing to maintain her regional lead by placing second in the average.

Teammates Teisha Coffield, a Yuma, Colo., senior, and junior Justene Hirsig, of Cheyenne, added 150 points in breakaway roping. Coffield, the regional leader in the event, was third in the average, while Hirsig was one position back.

The final 75 team points came from Interior, S.D., sophomore Kelsey Lensegrav, who won the opening round of barrel racing, but did not record one of the six best times in the short go, to split fifth and sixth in the average.

The Cowgirls won the Casper College team title with 365 points, while the host T-Birds were second at 305. EWC was third with 195 points.

Performances for the Laramie River Rendezvous Rodeo at the Cliff and Martha Hansen Livestock Teaching Arena are 6:30 p.m. both Friday, April 26, and Saturday, April 27. The short go is Sunday, April 28, at 10 a.m.