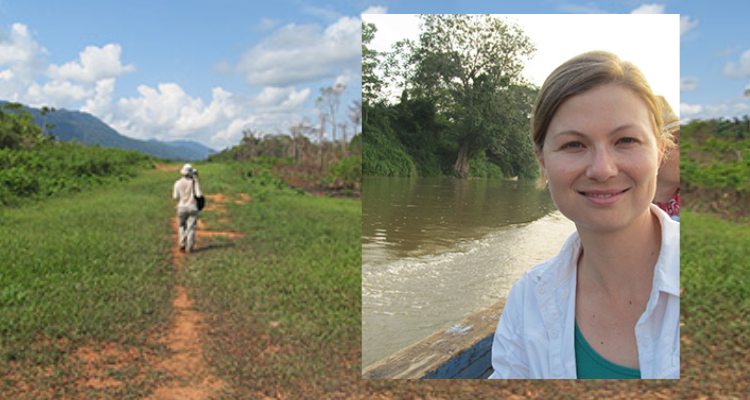 LARAMIE, WY. – For five decades, the U.S. government’s mission to intercept or seize cocaine and other drugs entering the United States originating from South America and going through Central America on the way to Mexico has been largely ineffective, and the volume of drugs coming into the United States continues to rise.

According to a University of Wyoming researcher, that’s because the focus of law enforcement agencies to identify transportation routes for drugs and seize them caused a ripple effect of drug trade organizations and cartels looking for new points of entry in a game of “cat and mouse.” This, in turn, created an unintended spread and fragmentation of existing trafficking routes, leaving in its wake widespread collateral damage, including corruption, violence, deforestation, displacement of communities and laundering of drug profits through other types of businesses, including cattle ranching.

Zoe Pearson, an assistant professor in UW’s School of Politics, Public Affairs and International Studies, was part of a research group that created a computer model called NarcoLogic. The computer model offers a much-needed, evidence-based tool to assess different cocaine interception scenarios and predict how drug smugglers react to attempts by authorities to intercept their narcotics. Development of the model relied on multiple theories, empirical studies, media reports and several of the authors’ own years of field research in the region, she says.

“Interdiction (intercepting), in and of itself, is always going to be problematic. We need a new approach to drug policy,” Pearson says. “We obviously care about the health consequences of drug abuse. We would hope to see new policies address the ill effects of drugs on some people’s health, and policies that wouldn’t cause collateral damage across the hemisphere.”

Pearson was a co-author of a paper, titled “Modeling Cocaine Traffickers and Counterdrug Interdiction Forces as a Complex Adaptive System,” that was published Monday in the Proceedings of the National Academy of Sciences (PNAS). The journal is one of the world’s most prestigious multidisciplinary scientific serials, with coverage spanning the biological, physical and social sciences.

The model produced realistic predictions of where and when drug traffickers move in and around Central America in response to law enforcement intervention. The model demonstrated that narcotics trafficking is as widespread and difficult to eradicate as it is because of the interception and seizure of drugs. Additionally, the model showed increased seizure of drugs will continue to spread traffickers into new areas.

When major drug kingpins, such as Pablo Escobar and Joaquin Guzman Loera, a.k.a. “El Chapo,” are killed or arrested, and taken out of play, this seems like progress — at least on the surface. But, in reality, Pearson says such action creates the “cockroach effect,” in which other drug traffickers rise up to fill the leadership void.

For eight years, Pearson has been part of a team of researchers looking at the environmental, social and political effects of drug trafficking policy in Central America. For nine years, she has been conducting research on drug control policies in Latin America more broadly.

Her role in the new paper included “contributing information we needed to create the model. It included some fieldwork I conducted in Honduras that would impact the model, and I added detail based on drug literature,” Pearson says.

As an Ohio State University graduate student working on her Ph.D. on drug policy in Bolivia, Pearson traveled to Honduras in 2011 with her faculty adviser, geography Professor Kendra McSweeney. Pearson recalls taking a two-day trip by canoe down a river in a remote area known as the Mosquitia region. There, the two came across an area that had been deforested to make way for an airstrip and learned that people had been displaced due to violence and drug traffickers running them off from where they lived.

“We saw so much deforestation, and one entire town was completely emptied out,” Pearson recalls. “Someone we met wanted to exchange dollars for Honduran bills. He had crisp U.S. $20 bills in the middle of nowhere.”

Pearson says money from drug profits is often laundered through cattle ranches and oil palm plantations — both of which flourish on deforested land.

“We were very careful not to ask direct questions about drug trafficking,” Pearson says of her time in Honduras.

Additionally, the research team used data compiled by the Consolidated Counterdrug Database (CCDB), which documents, over many years, cocaine movement through the Western Hemisphere.

“Outside of the government, we think we’re the first team to use this CCDB data,” says Pearson, who has been at UW for three years.

The work was supported by the National Socio-Environmental Synthesis Center through a grant from the National Science Foundation (NSF). Magliocca and McSweeney, another co-author of the paper, received additional funding from an NSF Early-Concept Grants for Exploratory Research Project.

The researchers’ hope is that Congress and government agencies will review their paper and use it in creating future drug policy.

“We hope our research is being read by people with the potential to make policy change,” Pearson says.