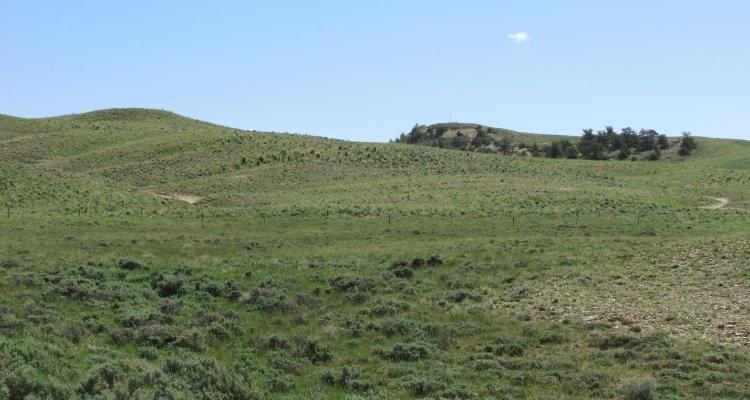 LARAMIE, Wyo. | (University of Wyoming) – A new approach to reclaiming lands disturbed by surface mining is having the desired result of improving ecosystem diversity, including restoration of foundation species such as sagebrush, according to a study by University of Wyoming researchers.

The study by Associate Professor Kristina Hufford and graduate student Kurt Fleisher, in the Department of Ecosystem Science and Management, looked at former uranium and coal mine sites in central and southwest Wyoming reclaimed under the Wyoming Department of Environmental Quality’s (DEQ) Abandoned Mine Land (AML) program. The research was published recently in the Journal of Environmental Management.

Traditional reclamation techniques generally have created landscapes with uniform topography and linear slopes, sometimes resulting in problems with erosion, as well as less-than-desired revegetation. Geomorphic reclamation is a relatively novel approach intended to mimic the topography of nearby undisturbed lands, with a wide variety of terrain that is stable and less susceptible to erosion.

DEQ’s AML Division used both traditional and geomorphic techniques in reclaiming a former uranium mine in the Gas Hills of Fremont County and a former coal mine north of Rock Springs in Sweetwater County. The seeding of those sites was completed in 2007 and 2009, respectively. With funding from DEQ, the UW scientists examined the sites in the summers of 2017 and 2018 to compare plant growth.

While geomorphic techniques didn’t result in landscapes exactly matching undisturbed rangeland at either site, the researchers found that geomorphic reclamation was more successful than traditional reclamation from several perspectives.

Most significantly, there was more plant diversity and species richness, including larger numbers of shrubs such as sagebrush and rabbitbrush. These native species are of particular importance to sage grouse, pronghorn and other wildlife species.

“The results of geomorphic reclamation for shrub recovery may have benefits for species that depend upon sagebrush,” Hufford says.

They also suggest that seed mixtures could be adjusted to include more native plant species and come closer to matching vegetation on surrounding undisturbed rangelands.

The issue has particular relevance for Wyoming, where nearly 90,000 acres have been disturbed by surface mining and many more have been permitted for future mining.