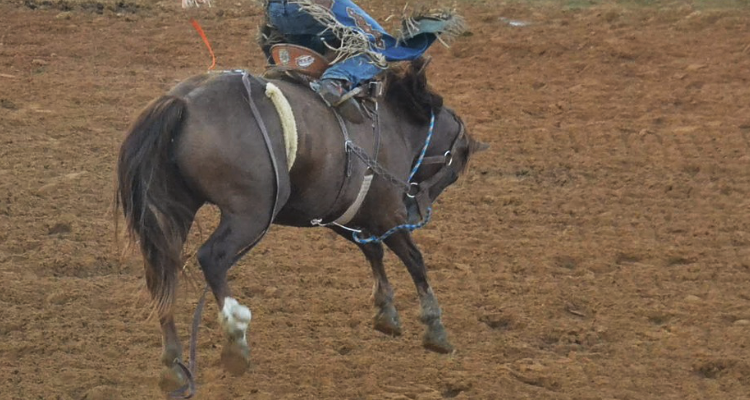 LARAMIE, WY. – More than halfway through the fall season, both the University of Wyoming rodeo clubs are proving last season was no fluke.

The UW Cowgirls continued their torrid start to begin the new season by winning again, taking the Central Wyoming College (CWC) team title last weekend to solidify their hold as the best team in the Central Rocky Mountain Region (CRMR).

After a slight bump a week ago with their lowest output of the season, the UW men’s team rebounded with a solid second-place finish at CWC to move into the runner-up position in the overall CRMR standings.

With just two more competitions left on the fall slate, the Cowgirls are looking to repeat as regional champions. The Cowgirls have compiled 1,238.33 points to open up a 400-point lead over second-place Casper College. Gillette College, which finished second a year ago in the region to the UW women, is third with 780 points.

Only the top two teams in the region receive automatic bids to next summer’s College National Finals Rodeo.

That is important to the UW men’s team as the Cowboys look to repeat as regional champions. The Pokes overtook Chadron State College for the No. 2 spot in the region with 1,420 points through three competitions. Season-long leader Casper College remains the top team with 1,775 points. Gillette College moved into third place by winning the CWC rodeo last weekend and has a total of 1,345 points. Chadron State slipped to fourth place with 1,230.

“I am very proud of the entire team. The whole group continues to grow and improve in every event,” UW Coach Beau Clark says. “The thing I am most proud of is how many of them truly support their team and want to see their teammates succeed. It’s a talented group, and they have really pulled for each other this season.”

Transfer students Taylour Latham, of Roosevelt, Utah, and Jacey Thompson, from Yoder, paced the Cowgirls’ win, recording the bulk of the scoring.

Latham accounted for nearly half of the team’s scoring when she placed in two separate events. Latham totaled 145 points in goat tying by winning the long go and splitting second in the average. She had the second-fastest time in the barrel racing short go and wound up sixth in the average. She was second in the all-around during the weekend rodeo.

Thompson won an individual event for the first time this season, taking the goat tying competition. She split the opening round and was the second fastest in the short go to add 155 points to the team’s output.

Two-time defending breakaway roping champion Teisha Coffield won the opening round but could not match that in the short go. The Yuma, Colo., defending all-around champion finished sixth in the average.

The Cowgirls won the CWC rodeo with 445 team points, while Sheridan College was second with 360.

A handful of non-points team members also placed at the CWC rodeo. Rachael Calvo, from Bassett, Neb., was fourth in the barrel racing average; Faith Hoffman, from Kiowa, Colo., split second place in goat tying; and Mikenzy Miller, of Faith, S.D., was sixth in the average, also in goats.

Seth Peterson remained on pace to defend his all-around CRMR title when he scored in two different events, which included taking the steer wrestling competition. The Minot, N.D., senior scored a trifecta, winning both rounds of bulldogging to take the average, notching the maximum 180 points. He scored 20 more points by placing fifth in the tie down roping’s opening round.

The Pokes had another individual event champion during the weekend. Houston Brown, of Miles City, Mont., split the opening round in saddle bronc riding and turned around to score the top ride in the short go to take the average.

Final team points came from Austin Hurlburt, from Norfolk, Neb., who was fourth in the bulldogging competition.

Gillette College was the CWC rodeo’s top club with 690 points, edging the Cowboys, who scored 655.

Other UW Cowboys not on the points team also placed at CWC. Jace Logan, of Yampa, Colo., was sixth in the steer wrestling average; and Justene Hirsig, of Cheyenne, and Garrett Nunn, from Laramie, were fourth in team roping.