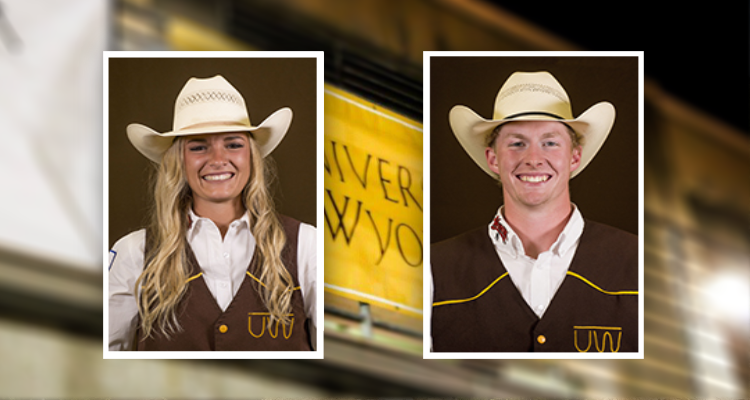 LARAMIE, WY.  –  Winning regional championships in the same season for the first time in 13 years, the University of Wyoming rodeo teams aim to take the next step as national title contenders. The groundwork has been established heading into the 2019-2020 schedule.

To say both UW teams are loaded this season is an understatement. The talent second-year Coach Beau Clark has retained and recruited should serve notice that the Cowboys and Cowgirls will not give up their Central Rocky Mountain Region (CRMR) titles anytime soon.

Four of the six members from last season’s points team return, including three Cowboys who ran 1-2-4 in the all-around standings at season’s end. And to show just how strong the women’s team will be, only one member from last year’s four-woman team will open the season this weekend at Chadron State College. The other three College National Finals Rodeo (CNFR) qualifiers from last year did not make this weekend’s points team roster. The three newcomers on the points team for the Chadron State rodeo bring in strong CNFR credentials, Clark says.

With so much talent on the point’s teams and throughout both rosters, the CRMR championships are for the Cowboys and Cowgirls to lose. But, Clark is taking the wait-and-see approach before the season begins.

“I’m sure other programs will be very successful, and there are good coaches in our region. So, it’s hard to know what everyone has, but I’m sure they also have done a good job recruiting,” the low-key Clark says. “We will have to work hard at it this year just to repeat.”

Clark admits he had a tough decision to make in selecting the points teams this weekend because several on both clubs have CNFR experience or bring in top-notch credentials on the national high school level.

“It’s great this year because we have so many kids who could be on the points team,” he says. “We have lots of talented student-athletes on the teams. And there are more on the team who could be a surprise.”

Two-time regional breakaway roping champion Teisha Coffield, of Yuma, Colo., heads the four-member women’s team this weekend. The Cowgirls, as a team, finished fifth in the nation last season. Coffield is the defending all-around CRMR champion and was the national points leader in breakaway roping. She finished among the top 10 in goat tying at last season’s CNFR.

Also tabbed to the points team is Eastern Wyoming College (EWC) transfer Jaycee Thompson, of Yoder, who finished second in the all-around to new teammate, Coffield. Thompson is a two-time CNFR qualifier in both goats and breakaway roping.

Casey Reimler, of Rozet, is a three-time CNFR qualifier and past goat tying regional champion. She has been on the Cowgirls’ points team on and off during her UW career.

And the fourth member is newcomer Taylour Latham, from Roosevelt, Utah, and a transfer from perennial regional power Gillette College. She is a two-time regional champion goat tyer and was the CNFR reserve national champion in goat tying two years ago. She placed among the top 10 in her specialty event during last season’s national finals.

Caden Camp, of Belgrade, Mont., finished as the regional all-around runner-up to Peterson. He was second as the header in team roping and fourth in steer wrestling. He was named the CNFR’s Rookie of the Year last season.

Ty Everson, from Helena, Mont., also contended for the all-around last year, placing fourth in total points. He placed third in the regional steer wrestling standings and was fourth in the nation last season in the same event.

The fourth returning points team member is Jase Staudt, of Nathrop, Colo. He is the defending Professional Rodeo Cowboys Association Mountain States All-Around Champion. He finished among the top three in both heading in team roping and calf roping in the CRMR last year.

A pair of Laramie County Community College transfers will see action for the first time this weekend as UW Cowboys.

Houston Brown, of Broadus, Mont., finished third in the CRMR all-around, rides saddle broncs, and is both a calf roper and team roper. Brown also is a former National High School Rodeo saddle bronc riding champion. The Cowboys did not have a roughstock competitor on the points team for a majority of last season.

And Austin Hurlburt, from Norfolk, Neb., won the tie down roping title and was second in the all-around two years ago.

Clark listed others who could be pushing for starting berths on the points teams for both clubs:

Men’s Team
— Chadron Coffield, an EWC transfer and brother of Teisha Coffield. He was last year’s regional calf roping champion.
— JC Flake, from Mesa, Ariz., was last year’s top team roping champion heeler and was the nation’s best heeler two years ago on the high school level.
— Jace Logan, a newcomer from Yampa, Colo. He was last season’s national high school all-around and steer wrestling champion. The athletic Logan is a Colorado wrestling champion and also was a top football player.
— Donny Proffit, of Kemmerer. He was last season’s Wyoming all-around high school champion and the state’s top bareback rider. He was a four-time state wrestling champion for the Rangers, and he also will wrestle for the UW Cowboys this season.
— Chase Rose, of Lincoln, Calif. He is a solid bareback rider who has improved and will be a top competitor this year, Clark says.
— Wyatt Tarver, from Gillette. He will push for a starting berth as a team roper.
— Dustin Taylor, of Craig, Colo. He brings in experience as a former Cowboys points team member in team roping. He qualified for the CNFR as a heeler in 2016.
— Cash Wilson, a newcomer from Wall, S.D. He is the 2018 high school national champion bronc rider and this season’s reserve national champion in the same event. Wilson is a three-time South Dakota saddle bronc riding champion, and was a four-sport standout in football, basketball, wrestling and track.

Women’s Team
— Karson Bradley, a Central Wyoming College transfer from Big Piney. She was second in the CRMR barrel racing standings last season and won a round at last season’s CNFR.
— Rachel Calvo is another former points team member from Bassett, Neb. She is the defending regional barrels champion and finished third at last season’s CNFR in her specialty event.
— Justene Hirsig, another past points team member from Cheyenne. She qualified for the CNFR in team roping two years ago.
— Faith Hoffman, a Northeastern Junior College (Sterling, Colo.) transfer from Kiowa, Colo. She placed fourth in goat tying the last two years in the region and will push the starting team members in the event, Clark says.
— Shayla Howell, from Colony. She is a contender in both team roping and breakaway roping. She made the “Faces in the Crowd” section in Sports Illustrated during her high school track career in Belle Fourche, S.D., after winning four individual state titles. Howell was the Gatorade Track Athlete of the Year for South Dakota. She already is one of the top long and triple jumpers for the UW women’s track and field team.
— Kelsey Lensegrav is a former points team member from Interior, S.D. She is a two-time barrel racing CNFR qualifier.
— Mikenzee Miller, a newcomer from Faith, S.D. She had a solid high school career and was a two-time national qualifier. She also is a three-sport athlete on the high school level, competing in basketball, volleyball and track.
— Payton Donnelly, from Elk Point, S.D. She was on last year’s Cowgirl points team and qualified for last season’s CNFR in breakaway roping.