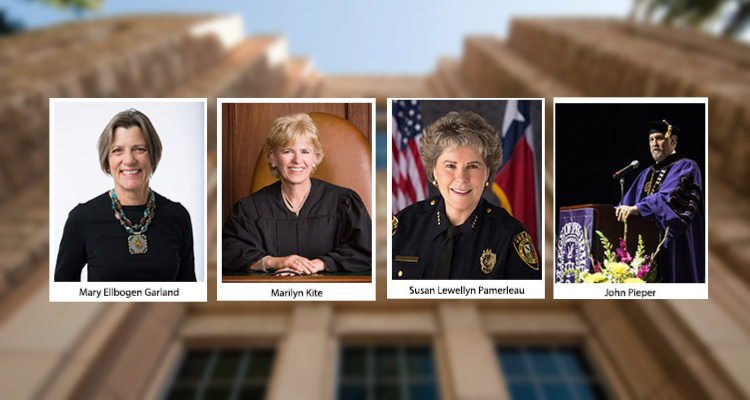 Four University of Wyoming alumni will be honored for their professional achievements and support of the university during this year’s UW Homecoming, Oct. 13-20.

Marilyn Kite, Susan Lewellyn Pamerleau and John Pieper have been selected for the 2018 Distinguished Alumni Award. Mary Ellbogen Garland is this year’s Medallion Service Award recipient. These awards are presented by the UW Alumni Association (UWAA).

The Distinguished Alumni Award recognizes alumni who have achieved excellence in their professions; who appreciate the impact of their UW education; and who are people of integrity, stature and demonstrated ability. To date, 195 alumni have received this recognition.

The Medallion Service Award recognizes outstanding service to the university and goes to people of exceptional integrity and stature who have unselfishly given of their time, talent and support. To date, 37 individuals have received this award.

“The Distinguished Alumni and Medallion Service Awards are a great inspiration to the alumni and students who witness all of the great accomplishments past graduates have earned,” says Keener Fry, UWAA executive director. “Recognizing these alumni brings honor and distinction to the University of Wyoming.”

Kite earned a bachelor’s degree in international affairs in 1970 and a law degree in 1974, both from UW. She developed expertise in environmental law, becoming a pioneer in the field. In 1981, Kite became a partner at Holland & Hart LLP, and she is the founding member of the Holland & Hart Cheyenne and Jackson Hole offices.

In 2000, Kite was appointed to the Wyoming Supreme Court, the first woman to hold the position. She served as chief justice from 2010-14 and retired from the court in 2015.

Kite is a strong promotor of women interested in law and has given many hours of service to the Wyoming State Bar. One of her passions is to promote citizen education concerning the way courts operate.

Retired Air Force Maj. Gen. Pamerleau earned a bachelor’s degree in sociology in 1968 from UW; a Master of Public Administration degree in 1978 from Golden Gate University; and an honorary doctorate in 1998 from Phillips University. She served 32 years in the Air Force. She later served military members and their families as a senior executive at the United States Automobile Association (USAA), a financial services company.

Pamerleau was the first woman elected sheriff in Bexar County, Texas. Recently, she was appointed by President Donald Trump and confirmed by the U.S. Senate as the U.S. marshal for the Western District of Texas, the first woman to serve in this position.

She established a bequest to support scholarships for UW Air Force ROTC students and created a sociology scholarship at UW.

He was the dean of the College of Pharmacy and a vice president at the University of New Mexico. Pieper also served as the president of the American College of Clinical Pharmacy (ACCP). He was selected as a fellow of the ACCP and the American Pharmacists Association.

Pieper and his wife, Patty, have created two endowments that support pharmacy at UW.

Garland earned a bachelor’s degree in marketing in 1984 and an honorary degree in 2009, both from UW. She is the president and chair of the John P. Ellbogen Foundation. The foundation has made a substantial financial commitment to UW and has focused much of its support on education. Specifically, the foundation assists projects from the Ellbogen Center for Teaching and Learning, the American Heritage Center’s Civic Initiative, initiatives promoting Wyoming student educational attainment and scholarships.

Garland has served on numerous boards, including the ENDOW (Economically Needed Diversity Options for Wyoming) Executive Council, the UW Foundation Board, the UW College of Education Advocacy Board, and the UW College of Arts and Sciences Board of Visitors.

The UWAA will celebrate these honorees during Homecoming activities, including the UW Distinguished Alumni Dinner Oct. 19, the parade Oct. 20 and an announcement at the football game Oct. 20.

The UW Distinguished Alumni Dinner will begin at 6 p.m. with a cocktail hour at the Marian H. Rochelle Gateway Center, located at 222 S. 22nd St. Dinner and a program will follow at 7 p.m. The cost to attend is $25 per person, and the registration deadline is Friday, Oct. 12. To purchase tickets, go to uw.uwyo.edu/da2018.