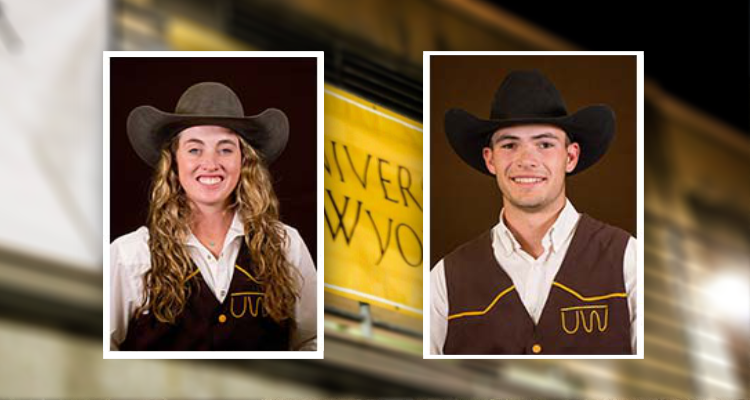 All four members of the Cowgirls points team scored to lead the UW women to their second consecutive win on the fall season over the weekend at the Laramie County Community College (LCCC) rodeo in Cheyenne. The Cowgirls racked up 475 points to break away from the pack, opening up a sizeable lead in the overall Central Rocky Mountain Region (CRMR) standings.

Colorado State University was a distant second with 180 points after Sunday’s final performance of the annual Shane Dubie Memorial Rodeo.

“It was a great weekend for UW rodeo. The women’s team was a highlight for the program this weekend in all events,” UW Coach Beau Clark says. “All of our goat tiers have done a great job the first two weeks of the season. I am beyond proud of their poise as competitors at these rodeos.”

The UW men had a solid outing with 690 points, but Casper College strung together its best outing in years, almost matching the Cowboys’ record-setting point total during the opening rodeo. The T-Birds scored 850 points at LCCC’s rodeo, just 15 points off UW’s team victory a week ago at Chadron State College (CSC).

For the season, both the UW women and men stayed atop the CRMR standings at the halfway point of the fall season.

The Cowgirls appear to be the team to beat once again as the UW women look to three-peat as the regional champions. With their latest team win, the Cowgirls now have 730 points, an almost 500-point lead against second-place CSC. The Nebraska school has 245 points on the year, while Gillette College is third with 200.

“The men’s team had a great weekend — 690 points is a great rodeo,” Clark says. “It is exciting to see UW rodeo be successful in every event. All three timed events and the three rough stock events have UW rodeo athletes competing at the top of the region. It is going to be an exciting year as we continue to move forward.”

The Cowboys, also looking for their third straight regional title, still lead but, with Casper College’s big weekend win, the gap narrowed in the overall team race. The Pokes have 1,555 points with two fall rodeos left on the schedule, while the T-Birds closed in and now trail the UW men by 125 points.

Led by Faith Hoffman, the Cowgirls received production from all four members of the points team. The Kiowa, Colo., student-athlete won the women’s goat tying event, scoring a perfect 180 points, winning the opening and short go rounds to give her the win in the overall average. She is the region’s top goat tier.

Yoder’s Jacey Thompson also was consistent in goat tying, finishing second in both rounds and in the overall average to Hoffman for an additional 150 team points.

The final team points came on the heels of Makenna Balkenbush’s and Taylour Latham’s performances. Balkenbush, from Sheridan, was fifth in the goat tying average, and Latham, from Lapoint, Utah, scored points by placing fifth in the barrel racing average. She also added points in the opening goat tying round, but she did not make the top six in the short go.

Goat tying is the deepest event for the Cowgirls this season with all four points team members scoring at LCCC. Two other Cowgirls — Karson Bradley, from Big Piney, and Brandy Schaack, of Hyannis, Neb. — also have placed in the first two rodeos.

Coffield, who leads the region in total points in tie-down roping, won his specialty event after taking the opening round and placing third in the short go. He also added 105 points by placing fourth in the overall steer wrestling average.

Jace Staudt, from Nathrop, Colo., was the third Cowboy to score in triple digits in his event. Staudt and Gillette College’s JC Flake won the opening round of team roping and were fourth in the average.

Two other UW men added to the team’s total points. Minot, N.D., senior Seth Peterson scored points in both tie-down roping and steer wrestling but did not place in the average. And Garrett Uptain, of Craig, Colo., was fourth in the saddle bronc average.