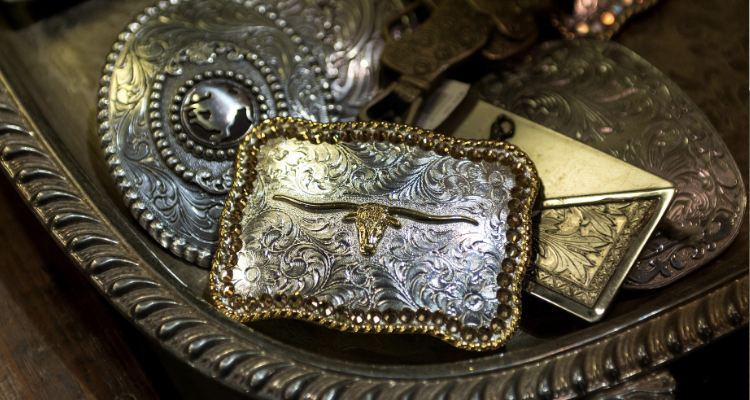 LARAMIE, WY. – If only Rachael Calvo had gone for broke during every round in the College National Finals Rodeo (CNFR) barrel racing competition.

The University of Wyoming sophomore was nearly flawless in her final run of the week during Saturday night’s championship round at the Casper Events Center. She finished as the nation’s third-best barrel racer.

Her effort helped lead the Cowgirls to a fifth-place finish with 275 points. Weeklong leader McNeese State University (Lake Charles, La.) won the national title with 462.5 points, while College of Southern Idaho (Twin Falls) was the runner-up with 370 points. The Cowgirls were 30 points from bringing the third-place trophy home.

Sitting only third going into the short go, Calvo knew it would take a sub-14-second run to win a national title. She came so close to accomplishing the task.

On her $2,000 horse — tens of thousands less than what some competitors paid for their barrel racing horses — Calvo covered the cloverleaf pattern in 14.21 seconds, her best run of the week.

The Bassett, Neb., native rode Stella to a four-run time of 57.51 seconds, compared to the winning time of 57.03 by College of Southern Idaho’s Ashtyn Carlson.

It was apparent what Calvo’s mindset was as she attacked the first barrel and ended coaxing Stella into a feverish run after the third barrel and into the homestretch. She went for it all. She had to, because her third-round time was her worst of the week, which cost her the No. 1 seed heading into the finals.

“I knew our third round was going to set us back a little bit timewise. I had to go for it all tonight,” she said. “If I had hit a barrel, or if I didn’t do so well, at least I could say I gave it my all and tried my best. I was just going for it.”

In hindsight, Calvo said she knew she should have been more aggressive all week.

“Looking back now, I think I should have run more like what I did tonight — go for broke in the first three rounds,” she said. “But, all in all, I was pretty pleased with it.”

This was Calvo’s second straight CNFR bid and her first short-go round qualification.

For about 10 minutes, teammates Ty Everson and Seth Peterson were running first and second in the nation in the steer wrestling competition. But, at the end, the final four bulldoggers all posted better times to keep the Cowboy duo from reaching the top positions.

The two teammates had to settle for fourth and fifth, respectively, in the event. Everson, a Helena, Mont., junior, was the top bulldogger for two minutes with his 5.2-second effort. That was his best four-run time of the week, which also was the short round’s fourth-best time.

But, at the end, his 20.7-second time in the aggregate was fourth-best in the overall average. He entered the championship round fifth in the average.

About two minutes earlier, Peterson, a Minot, N.D., junior, stopped the clock in nearly the same time — 5.4 seconds — as his Cowboy teammate. That was his second-best time of the four-run week.

He was 21.6 seconds on four head, improving by two places in the average, going from seventh to fifth.

They had the fourth- and fifth-fastest times, respectively, in the short-go round. They were the only two UW men to reach the championship round.

UW senior Teisha Coffield, of Yuma, Ariz., wrapped up her busy week with her best time of the week in 6.5 seconds in goat tying. She had an overall time of 26.5 seconds, which left her splitting seventh place with two other competitors.

Kelsey Lensegrav, an Interior, S.D., sophomore, also competed in the barrel racing short go. She was a longshot to finish among the round’s scoring leaders, entering in the No. 10 position among the 12 qualifiers. Her 14.46 effort in the finals left her with a four-run time of 58.43, placing her eighth overall.