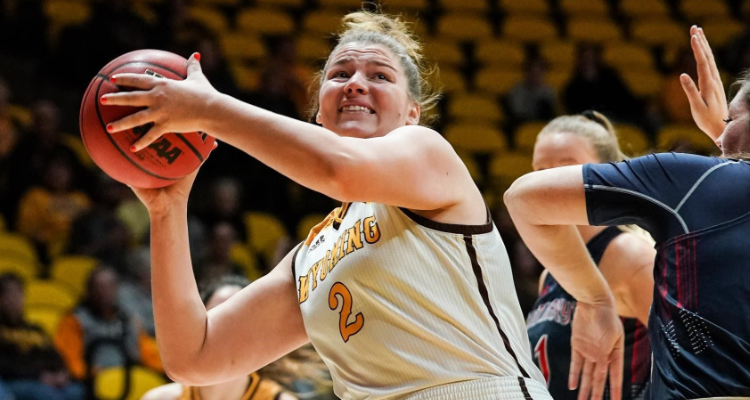 “One of the things we’ve been trying to get through to her is, Tereza is a very dominant post player when she plays with more of a physical mentality, where she’ll bounce those kids a little bit, get herself in the paint and turn and go to the basket,” Mattinson said.

The Cowgirls were extremely efficient from the field, shooting a season-best 54.9 percent (28-51) and reaching at least 50 percent shooting in every quarter. Wyoming made six of their seven threes in the second half, as they opened up their two-point halftime lead to the nine-point final margin.

“What we decide to do today, is we were a little bit more of a set-oriented team today,” Mattinson said. “We took our time a lot with the ball, and we didn’t run as much motion. We had something specific in mind with what we wanted to do with it, and when you get someone like Tereza playing how she played, it makes your offense more efficient.”

Wyoming was also strong on the boards, tying their season high with 30 defensive rebounds, and outrebounding North Dakota State, 37-23. The 23 rebounds allowed are a season-low for a Cowgirl opponent, and the +14 margin is the second best this year, behind the +15 margin in the season-opener against Colorado Christian.

Freshman Karla Erjavec flirted with a triple-double, scoring seven points, grabbing a career-high seven rebounds and dishing out a season-best seven assists. It is the ninth time in Erjavec’s career she has distributed at least five assists in a game.

Senior Taylor Rusk scored 12 points and had six rebounds and a season-high five assists. For Rusk, it is the first time this season and the 16th time in her career she has had at least five assists in a game, and it’s her 41st career double-figure scoring game.

Sophomore Quinn Weidemann scored 12 points and hit a pair of threes, reaching double-digit scoring for the second time this year and the ninth time in her career. Weidemann also had three assists on the night.

Vitulova started the game’s scoring by converting a hook shot in the paint, but the Bison answered on a similar play on the other end. The squads traded baskets until a Vitulova jumper and a Rusk three put the Cowgirls up 13-6, forcing a Bison timeout. Out of the break, the Bison hit a pair of threes, but Wyoming kept scoring, and a Vitulova turnaround jumper made it 17-12 for the Cowgirls. The Bison scored four of the next five points, and Wyoming held an 18-16 advantage after one quarter.

Sophomore Tommi Olson scored first in the second frame with a driving layup, but the Bison responded with a layup of their own. The Bison took a lead with a three, but a 6-0 Cowgirl run capped by a Sanchez Ramos layup made it 26-21 for Wyoming. The Bison then used a 6-0 run of their own to take a 27-26 lead before Weidemann ended the run with a driving layup. The back-and-forth play continued until the Bison went up 33-32 with 1:30 to play in the half. Erjavec found a rolling Vitulova for a layup on UW’s final possession of the half, and the Cowgirls took a 34-33 lead into the locker room.

Vitulova scored a jumper to open the third quarter, but the Bison answered with four straight points. Again, Vitulova scored for UW, but this time NDSU answered with five points to go up 42-38 on the Cowgirls. Vitulova hit a three to bring it back within one, and after the teams traded points, Rusk tied the game at 46 with a three from straight away. After a defensive stop, Vaifanua scored on the block to give Wyoming a 48-46 lead at the quarter break.

The Bison were led by Michelle Gaislerova’s 17 points and two rebounds, while Emily Dietz and Sofija Zivaljevic each scored 12 against the Cowgirls.

The Cowgirls return to the court on Saturday, Nov. 30, when they host New Mexico Highlands in the Arena-Auditorium at 2 p.m.