What Else Lies Beneath America’s Underground? 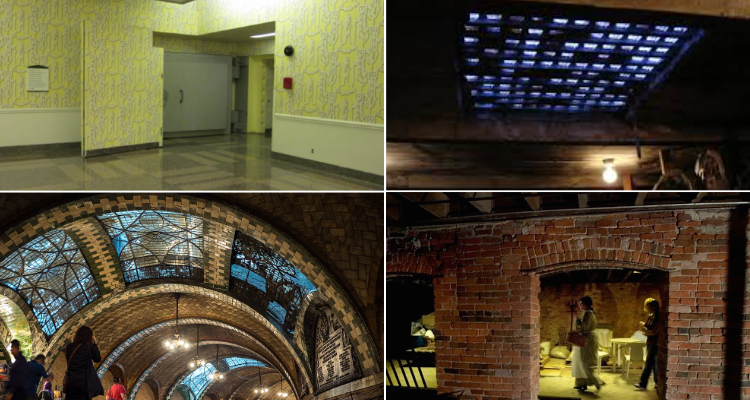 What Else Lies Beneath America’s Underground?

On Thursday, in recognition of National Underground America Day, we discussed whether or not it was common for humans to live in underground structures. We were introduced to a few populations around the world who were still, in some specific cases, living day-to-day lives underground in the modern day.

We also learned that roughly 6,000 North Americans are actually living out their lives living in underground homes. All of that discussion made us wonder what else could be out there, lying beneath the streets, sidewalks and landscape of cities and towns across the United States.

So, as a continuation of Thursday’s Underground America feature, let’s examine the hidden towns, nuclear bunkers and subterranean passageways that make up part of America’s underground architecture.

Hidden underneath the West Virginia wing of the Greenbrier Resort, lies a once top-secret project designed to safeguard the members of congress in the event of nuclear war. Behind 18-ton blast doors, is the Greenbrier Bunker, a two-story underground structure with a 1,100 person occupancy, containing showers, sleeping quarters, cafeteria, and an auditorium. Designed in the late 1960’s and actively maintained for close to 30 years, the existence of the bunker was never acknowledged by the government. A Washington Post story would later uncover the secret facility in 1992, leading to its decommission.

Beneath the busy cafés of city market in Indianapolis you’ll find a 22,000 square foot length network of catacombs. Stretching along the distance are limestone and brick arches and pillars that originally made up the basement of Tomlinson Hall. Tomlinson Hall was a vast municipal building that was demolished following a fire in the late 1950’s. The catacombs were used to transport and store meats and produce before the days of refrigeration.

“Havre Beneath the Streets”, Havre, Montana

Havre looks, at first glance, like just about any ordinary small town in north-central Montana. But a secret is hiding underneath the streets, one that even some visitors and residents of the area are unaware of. Below you will find artifacts from the rambunctious railroad town’s past and an underground city where Havre’s residents and business owners continued to conduct business following a devastating fire. The 1904 fire swept away blocks of the town, but in the aftermath, a saloon, restaurant, bordello, opium den and Chinese laundry were established, giving birth to the underground city. The tunnels underneath the town not only connected businesses one to another, but also served as ‘safe place’ for the Chinese railroad workers to travel about town avoiding rampant racism on the surface streets.

California’s capital city of Sacramento was a rendezvous for gold seekers in the mid-1800s. Prospectors would leave their ships and head inland on foot in search of gold. Bustling shops, banks, eateries, and lodgings sprung up along the river’s southern banks. In 1861, 45 days of Pacific storm surges decimated the city, but instead of abandoning their hometown, locals spent 15 years slowly raising the streets and houses by nine feet, leaving behind a maze of hidden underground spaces and streets.

From above, the concrete slab is easy to miss, unless you know it’s there. But, look closely and you can see skylights peeking through the ground cover, hugging the ground in a grove of dogwoods in City Hall Park. Below you are vaulted Guastavino tile ceilings and gorgeous wrought iron chandeliers, all part of the abandoned City Hall Subway Station, In New York City, situated almost directly beneath city hall, opened in 1904, New York City’s very first subway station was indeed a modern marvel of its time. Unfortunately, the fine architectural details were lost fairly quickly on busy commuters. After becoming one of the least-used stations in the system, and because a curved platform prevented affordable modification for longer, more modern train cars, the station was closed in 1945.

When the Great Seattle Fire razed 31 blocks to the ground in 1889, the city was rebuilt one to two stories higher, to lift it out of boggy land. Roads were filled in and raised, and buildings reconstructed so their ground floors became basements. New pavements then bridged the gap between the raised roads and first floor entrances, leaving tunnels and basements lying below the streets and buildings in downtown Pioneer Square, Seattle. Merchants and pedestrians continued to use some of the underground sidewalks that survived the fire, until 1907, when the city condemned the underground for fear of Bubonic plague.

The basement of the Higgins building in Los Angeles was once home to the city’s first privately owned power plant. But above the ground, the 10-story building, originally built in 1910, spent many years partially submerged underwater and falling to disrepair. In 2003, the building was renovated welcoming lofts and offices. Underneath a unique post-industrial steampunk-styled bar, named the Edison, opened in 2007, becoming a legendary spot known for its cocktails and burlesque shows, it also retained its turbine steam generators and utility tunnels as beautifully restored set pieces.

Hiding beneath Butte, Montana is a deserted secret world, including a barber, shoe shops, a prison and the Rookwood speakeasy, a hidden bar from prohibition days. These are well-preserved relics from the early 20th century, when mining was at its height and the population swelled to around 100,000. Space was at a premium, so people started using underground areas connected by tunnels.

Keeping the city of Chicago connected are 4 disjointed tunnel systems, running between skyscrapers and a host of different properties. Chicago’s Pedway is more of a tunnel system that houses stores and cafés, rather than an actual underground city. Spanning 40 blocks in the downtown area of Chicago, the Pedway offers pedestrians a way to traverse the city out of the freezing cold of mid-west winters. In addition to the stores, and cafés, the Pedway even houses a few residential buildings and connects to some hotels as well. It also connects Metra’s Millennium Station, the Chicago Cultural Center, a Macy’s store, city hall, and the James R. Thompson Center.

An underground city concourse full of shops, recreation, and restaurants sits below ground level at Empire State Plaza in Albany, New York. While the primary purpose above ground is to house state government buildings, what lies beneath are recreational shops and services allowing for government employees and the general public to relax when their workday is done. The concourse is also home to many precious and original works of art from famous artists like Jackson Pollock, Mark Rothko and Alexander Calder. The collection has been referred to as “the greatest collection of modern American art in any single public site that is not a museum”.

All of the buildings in the United States Capitol complex are connected by tunnels and underground walkways, which provide easy passage between legislative office buildings, the capitol, the Capitol Visitor Center, and the Library of Congress in inclement weather. The tunnels connecting office buildings are open to the public, but those connecting to the capitol require security clearance to use. Small electric tramways run from the Capitol Building to the Russell, Dirksen, and Hart Senate Office Buildings and to the Rayburn House Office Building.

These locations offer only a small sample of the underground architecture, both present and past, that can be found across America. There are so many more subterranean locations hidden away,  lost to time, or even widely used today. In cites and towns across the country and moreover, across the world, and maybe even in your hometown, there is a pretty good chance that something more than just sewers, access tunnels or transit systems are underneath your feet. If you are interested and willing to dig, you’re likely to find that the rabbit hole goes deep, so to speak, when exploring realities of the underground.