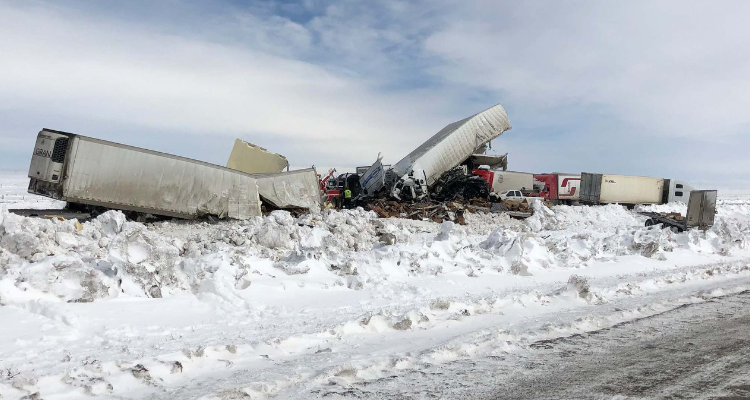 CHEYENNE, Wyo.  –  Troopers have learned roughly thirty vehicles collided on the westbound side of Interstate 80 around milepost 184.  This crash consisted mostly of commercial vehicles.  Secondary crashes involving around twenty-five vehicles occurred in front of this crash and within the stopped traffic.

Three fatalities were confirmed from crashes on the westbound side of the Interstate.

One of the fatalities was a passenger in a Toyota Highlander struck by a commercial motor vehicle.  The passenger in the Toyota has been identified as 53-year-old Marshall, Michigan resident Deborah Carrel.

The two other fatalities were both drivers of commercial motor vehicles.  They were identified as 64-year-old Denton, Texas resident Emman Ojiaka, and 27-year-old Hampton, Georgia resident Kian Kennedy.

The crash on the eastbound side of Interstate 80 around milepost 181 consisted of roughly forty vehicles.  The majority of the vehicles involved in this crash were commercial motor vehicles.

There were serious injuries reported with this crash but no fatalities. Carbon County Memorial Hospital treated approximately 30 people.

Due to the dynamics of the crash scene, some vehicles were initially counted that were not part of any crash.  As the investigation progressed, the total number of vehicles involved decreased.

Driving too fast for road conditions and following too closely are being investigated as the leading cause of the crashes.  Roadways were very icy with snowfall and blowing snow creating limited visibility at the time of the crashes.

The Wyoming Highway Patrol would like to thank the following agencies and departments who assisted with this incident;

Transportation from the scene of the crash was provided by school busses from Carbon County School District 1.

The patrol also would like to thank everyone who assisted victims of the incident with cots, blankets, food supplies, and any other items.