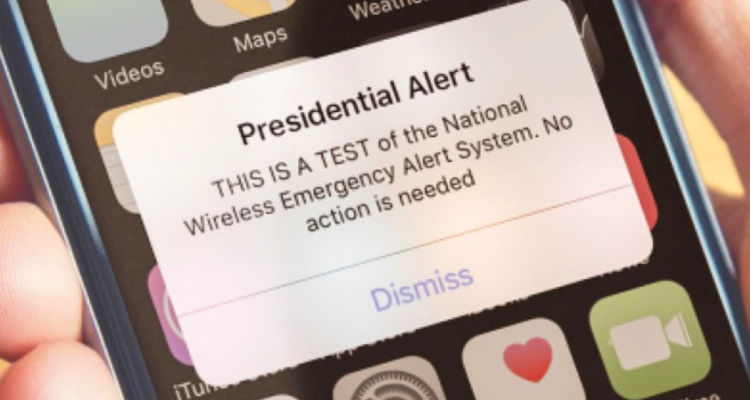 WASHINGTON, D.C.   –   Two separate national alert systems will be tested between 12:18 PM and 12:20 PM MST on Wednesday, October 3, 2018. Both alerts are for testing purposes only. There is no need to call emergency services with either activation.

The Federal Emergency Management Agency (FEMA), in coordination with the Federal Communications Commission (FCC), will conduct a nationwide test of the Emergency Alert System (EAS) and Wireless Emergency Alerts (WEA) at 12:18 PM and 12:20 PM MST, respectively.

This test will assess the operational readiness of the infrastructure for distribution of a national message and determine whether improvements are needed.

The EAS is a national public warning system that provides the President with the communications capability to address the nation during a national emergency through radio, television, cable, satellite radio and television providers, as well as wireline video providers. This alert will last approximately one minute and is similar to the familiar monthly EAS testing.

October 3rd marks the first national WEA test that will be sent to cell phones that are connected to wireless provides participating in WEA. The WEA system is used to warn the public about dangerous weather, missing children, and other critical situations through alerts on a cell phone. Cell towers will broadcast this test for thirty minutes. During this time, WEA compatible cell phones that are on, within range of an active cell tower, and whose wireless carrier participates in WEA should be capable of receiving the test message. Please note that some cell phones will not receive the test message, and cell phones should only receive the message once.

The WEA test message will have a header that reads “Presidential Alert” with text that says: “THIS IS A TEST of the National Wireless Emergency Alert System. No action is needed.”

This test was originally scheduled for September 20th but was postponed until October 3rd due to ongoing response efforts in Hurricane Florence.

Again, the activation of both alert systems on Wednesday, October 3, 2018 is for testing purposes only and do not warrant a call to emergency services.