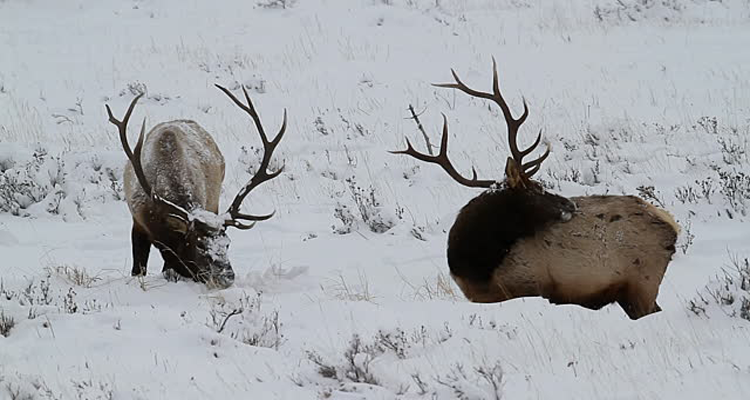 Cody, WY. | Tara Hodges, WGFD   –   As part of an ongoing study to understand the ecology of brucellosis and elk in the Bighorn Mountains, the Wyoming Game and Fish Department plans to capture and collar elk in early February.

Up to 60 elk will be captured next month using a helicopter net-gunning operation throughout the Bighorn Mountains, south of the lower Greybull River, and portions of the Owl Creek Mountains. Capture crew members will take blood samples, fit each elk with a GPS tracking collar, which will take multiple locations per day, and then release the elk.

Brucellosis, a disease caused by the bacteria Brucella abortus that causes elk to abort, is known to be widespread and common in elk in the Greater Yellowstone area. Elk and bison are the primary reservoirs of the disease. Brucellosis can be spread from elk to other elk and to livestock.

Since 2012, Game and Fish has documented 11seropositive elk along the western flank of the Bighorn Mountains. Seropositive test results indicate an individual elk has been exposed to the bacteria, but may or may not be infected with the disease.

In 2017, of over 600 blood samples submitted for testing from hunter-harvested elk in the Bighorn Mountains, none were positive for exposure to the Brucella bacteria. Fifty-nine elk that were captured and collared last year as part of this effort also tested negative for brucellosis.

From captures that occurred in 2016 and 2017, there are currently 43 collars actively transmitting locations as a part of this study. Collars deployed this year collect eight locations per day, which will help Game and Fish develop more precise models to understand brucellosis prevalence in elk and potential risk of transmission to livestock, as well as resource selection of elk.

Funding for the study has been provided by the U.S. Animal Plant Health Inspection Service, Wyoming Game & Fish, Rocky Mountain Elk Foundation, Wyoming Sportsmen Group of Gillette, and University of California at Berkeley.