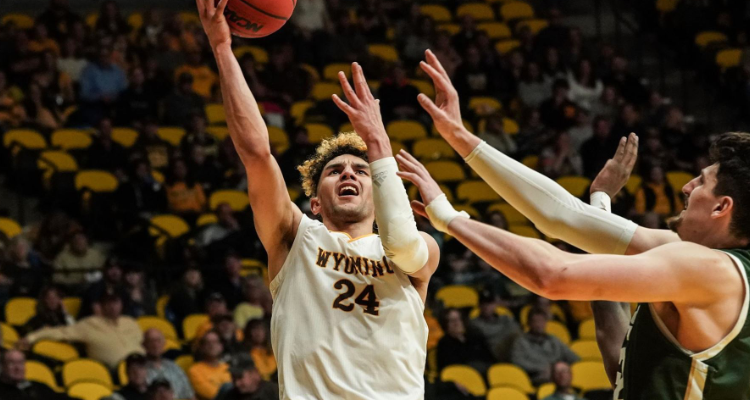 LARAMIE, Wyo. – The Wyoming Cowboys could not hold off a second half surge by Colorado State in a 77-70 loss to the Rams on Saturday afternoon in the Arena-Auditorium. The Pokes were held scoreless over the final four-minutes of the game, as the Rams erased a 19-point deficit with 14:06 remaining in the game.

“We were up eight with four minutes to go, but I thought the ball stopped popping a little bit in terms of us not sharing the basketball,” Wyoming head coach Allen Edwards said. “I thought we tried to take some tough shots down the stretch, but again we have a young group trying to figure out how to win basketball games.”

Wyoming was paced by redshirt sophomore Hunter Maldonado with 17 points on the night to lead all scorers in the game. He has scored in double-figures in all, but two games this season. He also added four assists and five rebounds. Senior Jake Hendricks added 14 points and five rebounds. Freshman Kwane Marble added 12 points along with sophomore Brandon Porter, as it tied a career-high for Porter. Marble has scored in double-figures in seven-straight games.

Wyoming and Colorado State each shot 41 percent from the field for the game. Wyoming held Colorado State to 1-of-15 to open the contest from behind the arc, as the Rams finished at 29 percent for eight point below their season average. Colorado State held a 52-26 advantage on the boards for the game, but only outscored the Pokes 24-22 in the paint. Wyoming finished the game with 21 points off of turnovers for the fourth game this season with 20 or more points off miscues.

“CSU did a good job of chipping away at the lead, and I thought we relaxed defending the three-point line late in the game,” Edwards said. “One of the things we talked about coming into the game was reaction — we needed to be there on the catch versus getting there too late to contest their shots. Being undersized, we knew the rebounding battle was going to be tough for us going against their two big guys in (Nico) Carvacho and (David) Roddy. But I thought our guys fought hard.”

The Pokes got out to a 7-3 lead in the opening four and a half minutes of play. Taylor added five of those points for the Cowboys including a three-pointer, as it was his x of the season. But Colorado State’s Isiah Stevens hit back-to-back pullups to tie the contests at 7’s.

The two teams would continue to go back-and-forth halfway through the frame, until Porter hit a pair of three-pointers to make it an 18-15 game for the Pokes with 9:11 left in the opening frame. The Rams would take the lead back at 19-18 with just over seven minutes, but it was short lived Marble made it 21-19 game with an and-one play seconds later.

Maldonado opened the second half with back-to-back buckets to build the Wyoming lead to 41-27 in the opening minute of the second half. Hendricks added a three-pointer and pushed the lead to 44-29 minutes later.

Hendricks went on a mini 5-0 run himself with his third triple of the half and a fast break layup to make it a 54-35 contest with just over 14 minutes left in the game. But the Rams responded with a 10-0 run over just under two minutes for a 54-45 game with 12:07 left.

The Rams would cut the lead to six points on a Kris Martin three pointer with 8:54 left in the game for a 59-53 game. Wyoming struggled from the field during the stretch going 1-of-7, but managed to get some points from the free throw line.

Wyoming would go without a field goal for over three minutes and the Rams would make it a four-point game at 64-60 with 5:20 left on another Martin three-pointer. Hendricks responded with a trio of freebies to build the lead back to seven points the following possession.

Porter would hit a three-pointer, as Wyoming built a 70-62 advantage, but a scoring drought for the Pokes and a seven-straight points from Colorado State made it a 70-69 game with 1:12 left in game. Martin would give the Rams a 72-70 lead on his third three-pointer of the game with 34 seconds left.

Colorado State had five players in double-figures for the game with Stevens leading the team with 14 points and four assists. Nico Carvacho added 11 points for the game and grabbed a game-high 17 rebounds. Martin added 13 points off the Ram bench.

The Cowboys return to action on Wednesday heading to Utah State for a 7 p.m. MT tipoff.