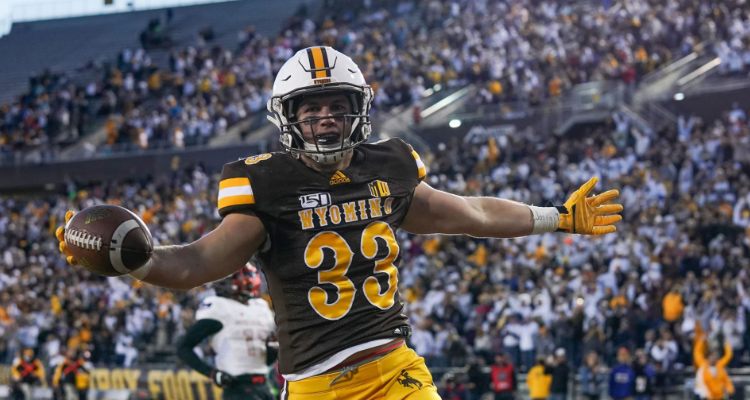 LARAMIE, WY.  –  The Wyoming offense scored on six consecutive possessions in the first half and generated 299 yards of first half offense to build a 33-10 halftime lead on way to a 53-17 home win over UNLV to open Mountain West Conference play 1-0 and improve their season record to 4-1.  The last time Wyoming began a season 4-1 was 2007.  A crowd of 23,029 saw the Cowboys win their fifth consecutive home game, dating back to last season.

Wyoming redshirt freshman quarterback Sean Chambers and true freshman running back Titus Swen each rushed for over 100 yards.  Chambers ended with 136 yards rushing, and Swen rushed for 102  It was Chambers’ second 100-yard rushing game of the season and fifth of his career.  Swen recorded his first career 100-yard rushing game.  Wyoming has now had four different individuals rush for over 100 yards in the first five games of this season.  Chambers also rushed for 120 yards in Wyoming’s season-opening win over Missouri.  Sophomore running back Xavian Valladay rushed for 118 yards versus Missouri, and graduate transfer running back Trey Smith rushed for 152 in Wyoming’s home win over Idaho.

“We had a whole host of guys making plays out there tonight,” said Wyoming head coach Craig Bohl.  “UNLV is a very good football team and that was a great win for us. We had a really great week of practice, and we took the field with very good energy. We had a great sense of confidence out there this evening. Everyone pulled together and we are 1-0 in the conference and that is a great start.

“I thought the guys really went out there and made some plays. At times I had to pull out a roster to see who was out there because we had lot of new faces. It was a great dominating win for us in the end.

“Sean (Chambers) really made some plays with his legs and of course he had some big passes. I thought Sean played well tonight.  We were gonna establish the run and we felt we needed to impose our will on UNLV early.”

Defensively, senior linebacker and All-America candidate Logan Wilson intercepted the seventh pass of his career and his first of this season in the second quarter, setting up a Wyoming field goal.  His senior running mate at linebacker, Cassh Maluia, intercepted his second pass of the season and fourth of his career to set up Wyoming’s final touchdown in the fourth quarter.  Redshirt freshman free safety Rome Weber intercepted the first pass of his career, picking off the UNLV quarterback in the end zone to end the Rebels’ final scoring threat of the game.  Senior strong safety Alijah Halliburton once again led the Cowboys in tackles with 11.

Wyoming ended the day with 498 yards of total offense, which was a season high.  UW’s previous season high was 389 yards against Missouri.  The Cowboys held UNLV to 340 total yards and only 77 yards rushing.  The Rebels came into the game averaging 243 yards rushing per game.

“Everything was working (in the first half) and it certainly had a big impact going into the half,” said Bohl.  “I think that (second) quarter changed the dynamics of the game and the pace of the game.”

The Cowboys were held to a three-and-out on their first offensive possession of the game.  After a Ryan Galovich punt, UNLV took over at its own 31-yard line.

The Rebels drove down to the Wyoming 22-yard line  where the Cowboys stopped them on a third and eight forcing a 40-yard field goal.  UNLV’s Daniel Gutierrez converted the 40-yarder to give UNLV a 3-0 lead.  On the drive Rebel quarterback Armani Rogers was 2-3 passing for 15 yards and wide receiver Darren Woods Jr. had a carry for 14 yards.  The Rebels were helped by a 15-yard pass interference penalty on Wyoming cornerback Azizi Hearn.

On their second possession of the game, Wyoming got its running attack going as sophomore running back Xazavian Valladay made his first appearance of the game.  Wyoming would drive 75 yards in eight plays, capped off by a seven-yard Valladay TD run.  Senior place-kicker Cooper Rothe added the point-after-touchdown to give Wyoming its first lead at 7-3.

The Rebels would respond on their second possession.  It looked like the Cowboys would force a punt on a third and seven from the UNLV 28, but quarterback Rogers spun loose from a tackle to gain nine yards and a first down.  Four plays later on a fourth and one from the UNLV 46, the Rebels went for it and Rogers would hit tight end Giovanni Fauolo with a jump pass just over the line of scrimmage.  Fauolo would take the pass and run for 54 yards and a touchdown, putting the Rebels back in the lead at 10-7.

Wyoming took over at its own 25-yard line with 1:09 remaining in the first quarter.  On second down and seven, Swen broke loose through the right side for the longest run of his young career — a 59-yard run down to the UNLV 13-yard line on the final play of the first quarter.  Swen was tackled for a four-yard loss on first down.  On second down, Chambers took the ball over the right side for 17 yards and the touchdown, giving Wyoming a 13-10 lead.  Cooper Rothe missed the PAT wide left.  It was only the second miss of Rothe’s career.  He had made 63 consecutive PATS prior to that miss dating back to the Cowboys game at Utah State in 2017 when Rothe missed his first PAT that day.

The Cowboy defense stiffened on UNLV’s ensuing possession, giving up only 17 yards before forcing the first Rebel punt of the day.

The Pokes took over at their own 35-yard line following the punt.  Swen would have runs of five and four yards on first and second down.  On third and one from the Wyoming 44, Chambers would hit senior tight end Josh Harshman on a pass over the middle and Harshman would take the pass 56 yards for his first touchdown reception of the season.  It was only his second career TD catch.  Harshman’s first career TD reception came as a true freshman in 2015.  Rothe’s PAT was good, and the Pokes took a 20-10 lead.

UNLV would gain 30 yards on its next drive, taking the ball down to the Wyoming 45-yard line where Wyoming forced a punt.  Wyoming senior Austin Conway returned the punt 19 yards to the Wyoming 32.  On a third and 12 from the Wyoming 30, Chambers would break loose for a rush of 34 yards to the UNLV 36.  On the next play, it looked like UNLV’s Javin White had intercepted Chambers, but a defensive holding penalty negated the interception.  Four plays later, Rothe would connect on a 41-yard field goal to extend Wyoming’s lead to 23-10.

On the second play of the Rebels’ next possession, UW senior linebacker Wilson intercepted Rogers at the UNLV 24-yard line and ran it down to the three-yard line. It was the first interception of the season for Wilson and the seventh of his career.  It also marked the fourth interception of the season by a Cowboy.  But UNLV’s defense would hold the Cowboys out of the end zone and force a 21-yard field goal by Rothe, making the score 26-10.

Wyoming’s defense forced a three-and-out on the next Rebel possession and took over with good field position at the Wyoming 42.  On a third and seven from the Wyoming 45, Chambers connected with Conway for 20 yards to the UNLV 35-yard line.  At the end of the play, UNLV was charged with a personal foul, moving the ball to the UNLV 20-yard line.  Chambers would then find redshirt freshman tight end Jackson Marcotte down the right sideline and Marcotte would carry the ball into the end zone, extending UW’s lead to 33-10 following Rothe’s PAT.

Neither team would score in the third quarter, but late in the third quarter, Wyoming’s defense would hold UNLV on a fourth and one at the UNLV 48, giving the ball to the Cowboy offense in great field position.  A 28-yard completion from Chambers to Conway moved the ball to the UNLV 19-yard line.  On the second play of the fourth quarter, Chambers would cap off the scoring drive with a five-yard TD run, building Wyoming’s lead to 40-10.

The Rebels would respond with a scoring drive of their own on the next possession, driving 74 yards in 14 plays to cut the lead to 40-17.

UNLV attempted an onside kick, but UW defensive back Keyon Blankenbaker recovered the kick at the UNLV 45.  After a one-yard gain by Swen on first down, the freshman would break a 44-yard run and a touchdown on second down.  It was Swen’s first career touchdown as a Cowboy.  Rothe would amazingly miss his second PAT of the game, and the Cowboys had a 46-17 lead with 9:44 remaining in the game.

It was on the first play from scrimmage on UNLV’s following drive when senior linebacker Maluia would intercept UNLV’s quarterback.  Maluia returned the interception 30 yards to the UNLV four-yard line.  Valladay would carry the ball into the end zone for the Pokes on first down for his second rushing touchdown of the game, and give Wyoming its final margin at 53-17 after Rothe’s successful PAT.

UNLV would threaten one final time two possessions later, but freshman free safety Weber would intercept the third pass of the day for the Cowboy defense, this one coming in the Wyoming end zone.

Another redshirt freshman, Brett Brenton, would break runs of 34 and 41 yards on Wyoming’s final drive.  Brenton’s 41-yard run ended with him being tackled at the UNLV one-yard line, just shy of the goal line.  The Cowboy offense would then take a knee twice to end the game.

Wyoming has its first bye of the season this coming week.  The Cowboys will return to action on Saturday, Oct. 12 when they travel to San Diego, CA., to face the San Diego State Aztecs.