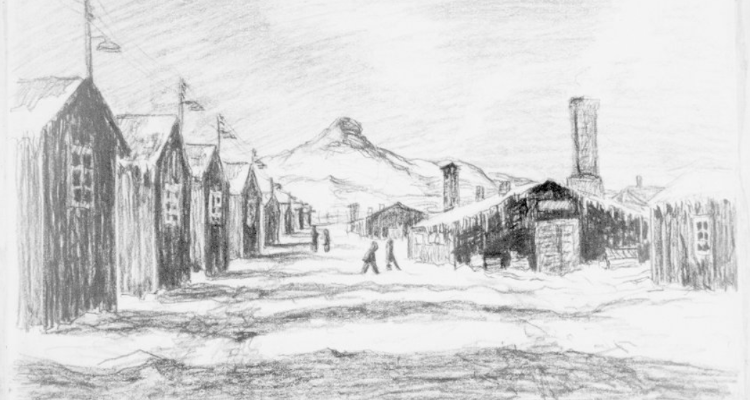 Cody, WY.    –  This year, the Heart Mountain Relocation Center marked its 75th anniversary. On August 12, 1942, the first Japanese-American citizens from the West Coast arrived by train to the internment camp located between Powell and Cody.

The Wyoming State Library has created an online exhibit commemorating life at Heart Mountain using stories from the camp newspaper, The Heart Mountain Sentinel, and images from the digital collections of the American Heritage Center. The exhibit and fully digitized, searchable issues of the Sentinel may be found in Wyoming Newspapers at newspapers.wyo.gov.
“Reading through the Heart Mountain Sentinel gives you a sense of the everyday activities at the camp,” said Thomas Ivie, Wyoming State Library Research and Statistics Librarian. “It certainly isn’t the whole story, but it does provide details that might not be recorded anywhere else.”

The digital exhibit begins with the story of the forced relocation and delves into the life of the camp — farming, education, medical services, and recreation. Of particular note were Japanese-Americans who enlisted or were drafted from the internment camps and fought in the military. A large number of images are sketches of camp life from the AHC’s Estelle Ishigo collection.

After the war, Heart Mountain’s incarcerees were left to try to rebuild their lives. Many had lost homes, businesses, savings, and more. It was not until the 1990s that survivors received redress payments and an apology from the government.

Explore this piece of Wyoming’s history at newspapers.wyo.gov/heart-mountain.