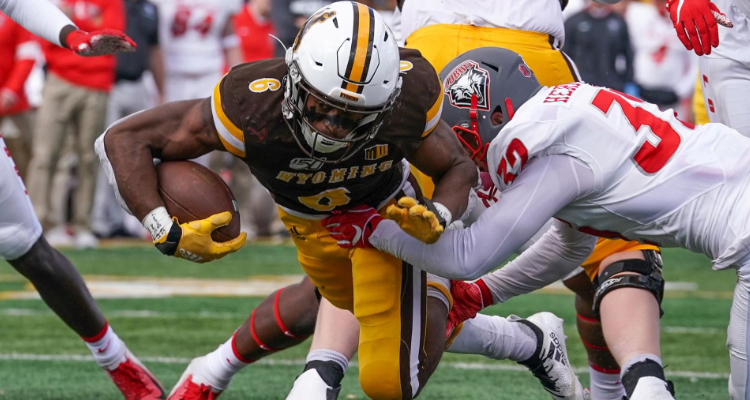 LARAMIE, WY. – The Wyoming Cowboys won their sixth consecutive home game and improved their 2019 record to 5-2 and 2-1 in the Mountain West with a 23-10 victory over the New Mexico Lobos (2-5, 0-3 in the Mountain West) on Homecoming. The six-game home winning streak dates back to last season and includes three consecutive home victories this season.

“It was a hard-fought game, and it was a really big win,” said Wyoming head coach Craig Bohl. “Anytime you can win on the Mountain side that’s huge. I was really pleased with our effort. Our guys played hard despite being a bit dinged up entering the game. We ran the ball well today and threw the ball better.

“Our backs were running hard tonight even though we’re thinner there right now. We are much improved
on the offensive line on the season and that is helping us.”

Wyoming was led offensively by redshirt freshman quarterback Sean Chambers and sophomore running back Xazavian Valladay, who rushed for 117 and 127 yards respectively. Each had a rushing touchdown. Chambers also completed 60.0 percent of his passes (9 of 15) for 86 yards, connected with six different receivers and threw one TD pass. The touchdown pass went to senior tight end Josh Harshman for 15 yards. Senior wide receiver John Okwoli had the best day of his career, catching three passes for 33 yards. Harshman had two receptions for 20, and Valladay caught one for 25 yards. In all, Chambers accounted for 203 yards of total offense, and Valladay had 152 all-purpose yards. The Wyoming offense also recorded a season high 11 third-down conversions, converting 11 of 18 third-down opportunities.

“I thought our ability to convert on third down was huge for us, it helped our defense a lot,” said Bohl. “We were able to stay on the field longer and had a couple of long, time-consuming drives.”

Defensively, the Cowboys shutout the Lobos in the first half, recording their second shutout of an opponent in a half this season. (UW also shut out Texas State in the second half on Sept. 7, 2019, in a 23-14 road win.) The 10 points allowed by Wyoming against the Lobos on Saturday was a season low point total by a UW opponent this season. Wyoming has held four opponents under 20 points this season, and entered Saturday’s game ranked No. 3 in the Mountain West in scoring defense, giving up an average of only 21.3 points per game. After the win over the Lobos, the Cowboy defense improved that number to 19.7 points allowed per game.

“We may bend a little too much,” said Bohl. “Our scoring defense isn’t really matching up with what we allow in total yards, but we come up with some great stopper plays.”

Junior strong safety Esaias Gandy recovered a New Mexico fumble in the first quarter that led to Wyoming’s first touchdown of the game. He added three tackles, a half tackle for a loss and later was involved in a big stop on a fourth down play by New Mexico. Gandy’s fumble recovery would be the eighth takeaway this season that Wyoming would turn into points. The Cowboys have scored 48 points (six touchdowns and two field goals) following takeaways in 2019.

All total, Wyoming has had four different individuals record seven 100-yard rushing games through the first seven games of this season, including one 100-yard game each for graduate transfer running back Trey Smith (Idaho) and one for true freshman running back Titus Swen (UNLV). Both Smith and Swen are currently out with injuries.

It was a quiet first quarter until 1:40 remaining in the first period when Wyoming free safety Rome Weber knocked the ball loose from New Mexico running back Bryson Carroll at the Lobo 37-yard line. The fumble was recovered by Gandy, who returned it one yard to the 36. On first down, Chambers would throw a wheel route to running back Valladay for 25 yards down to the 11-yard line. After rushes of three and seven yards by Valladay, Chambers would go into the end zone untouched off right tackle to give the Pokes a 7-0 lead with four seconds remaining in the first quarter. The first half would end with the Cowboys holding that 7-0 lead.

New Mexico took the opening kickoff of the second half and moved the ball 45 yards, but on a fourth and three at the Wyoming 29-yard line Wyoming safety Gandy came up to tackle UNM running back Ahmari Davis for a one-yard loss to give the Cowboys the ball back on downs.

“Anytime you stop a team on fourth down is huge,” said Bohl. “Sean (Chambers) went out there and made some big plays following that and that helped us win. He really showed a lot of guts and determination.

The Pokes would take over on their own 30-yard line after the Cowboy defense came up with that fourth-down stop. UW would utilize nine consecutive running plays highlighted by a 40-yard run by Chambers around the right edge that took the ball down to the New Mexico 11-yard line. Valladay would cap off the drive with a three-yard TD run three plays later. Place-kicker Rothe would miss the PAT wide left, and the Pokes had a 13-0 lead.

After the two teams exchanged punts, the Lobos would take over at the Wyoming 48-yard line following a 14-yard punt return by De’John Rogers. New Mexico would proceed to move the ball 40 yards in seven plays that would result in a 25-yard field goal by Andrew Shelley to pull within 10 points of the Cowboys at 13-3.

The Wyoming offense would engineer their longest drive of the game, a 10-play, 75-yard touchdown drive on its ensuing possession. The drive would begin with a 15-yard pass from Chambers to senior Okwoli. That would be followed by seven consecutive rushes by Valladay, Chambers and Cowboy redshirt freshman running back Brett Brenton. The drive would conclude with a 15-yard TD pass from Chambers to tight end Harshman. Rothe would kick the PAT, and the Cowboys extended their lead to 20-3.

New Mexico would insert a new quarterback on its next possession. Redshirt sophomore Tevaka Salanoa replaced senior Sheriron Jones. Salanoa guided the Lobos on their best drive of the game, a 75-yard, nine-play drive. UNM running back Ahmari Davis would break a 40-yard run taking the ball down to the Wyoming 16. After a New Mexico false start penalty moved the ball back to the 21, Salanoa would find wide receiver Aaron Molina on a 21-yard TD pass for the Lobos’ lone touchdown of the game.

Wyoming would add a 36-yard field goal by Rothe on its final possession of the game, to make the score 23-10.

New Mexico had one final possession, moving the ball 58 yards in seven plays, but their final pass play of the game would sail out of the back of the Wyoming end zone, and the Cowboys would prevail by a final of 23-10.

Next up for the Cowboys will be a home game versus the Nevada Wolf Pack on Saturday, Oct. 26 in a game to kick off at Noon, Mountain Time from Jonah Field at War Memorial Stadium.