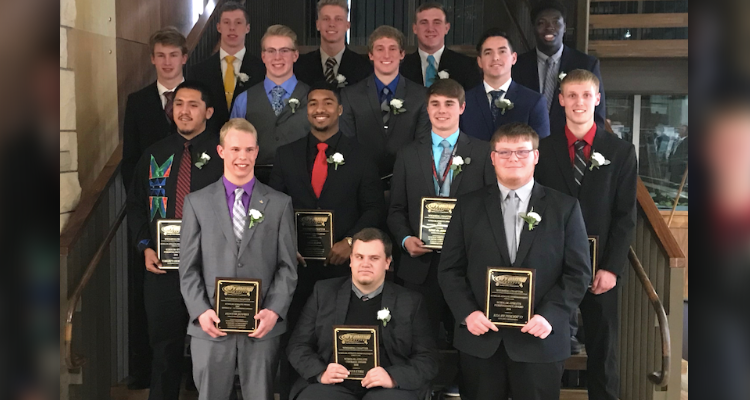 LARAMIE, WY. – The Wyoming Chapter National Football Foundation’s 2018 High School Scholar-Athlete of the Year is Kade VanDyken of Big Horn High School. Ranked second in a class of 34, VanDyken has a GPA of 3.975 and an ACT composite score of 29. Over the course of his football career for the Rams, he accounted for 19 touchdowns and he caught 87 receptions for 1,340 yards and 20 touchdowns.

A total of 15 finalists emerged from 127 nominations from 34 high schools and the University of Wyoming. A total of $19,200 in scholarships was awarded Saturday evening at the Marian H. Rochelle Gateway Center at the University of Wyoming. In the first 25 years of the Wyoming Chapter, a total of $369,150 in scholarships has been awarded. Each finalist Saturday was awarded a $1,200 scholarship and VanDyken received an additional $1,200 scholarship as the state’s top scholar-athlete.

Guest speakers were past Wyoming and West Regional Scholar-Athletes Justin Hopkin from Burlington in 1995 and Gavin Mills from Powell in 2008. Keynote speaker was Ron Dilatush, the membership chair of the National Football Foundation in Dallas, TX.

The Finalists honored on Saturday night were: