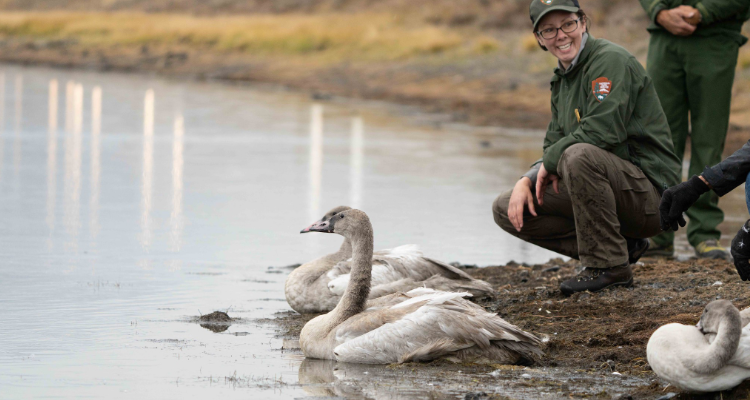 This release was part of an ongoing restoration project to increase territorial pairs of swans which have undergone a decades-long decline in the park. From a high of over 60 birds and 17 territorial pairs in the early 1960s, to only four birds in 2009 and 2010, the swan population has declined for a variety of reasons. Researchers are collecting population data such as nest success, number of territorial pairs, and the number of cygnets produced each year. This data may help determine the reasons for the decline.

Recent releases and other restoration efforts have bolstered the population to over 20 birds and five territorial pairs, including natural reproduction in some years.

The effort is part of a public/private partnership between the National Park Service, Wyoming Wetlands Society, Ricketts Conservation Foundation, and Montana State University.

Joe Ricketts, founder of Ricketts Conservation Foundation, participated in the recent cygnet release. His foundation also supports other avian conservation efforts in the region, including common loons and Clark’s nutcrackers.