You Can Benefit From Coloring as an Adult 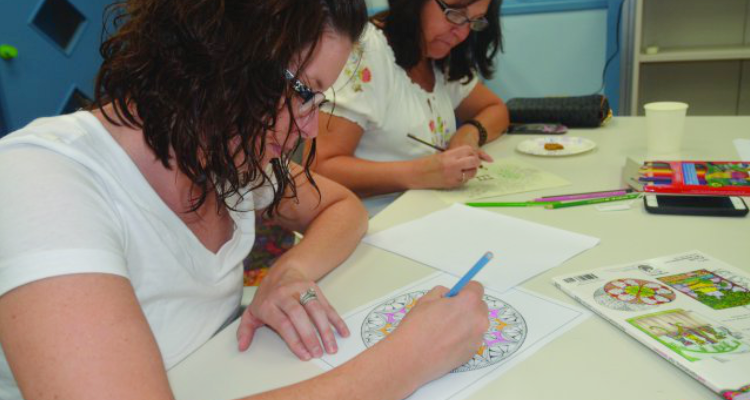 You Can Benefit From Coloring as an Adult

If you’re of the notion that spending time coloring is only a childhood activity, you might want to rethink that stance.

The activity that was once a go to activity used by parents to keep their children calm and entertained, became, in recent years, a therapeutic and relaxing activity utilized by adults to distract and unwind from the pressures of daily life.

For those who aren’t familiar, the detailed and intricate designs, and wider selection of themes are what differentiates these coloring books intended for adults from a typical coloring book one would buy for a young child. Themes for adult coloring books run the gamut from flowers, animals, and mandalas, to cityscapes, high-fantasy, human anatomy and even swear words.

While that early frenzy, and the big-money earned along with it has slowed a bit, one may still want to consider the countless health benefits of adult coloring. Don’t put those colored pencils, crayons, and markers away just yet!

Producers of adult coloring books have long claimed that the activity of coloring can reduce stress, lessen anxiety, and promote mindfulness, among other things.

Let’s explore a few of these claims and see what psychological and scientific research has to say about the purported benefits of adult coloring.

Relieves stress & anxiety
Researchers have identified that coloring can help to relax and lower activity in the fear center of your brain – the Amygdala. A 2005 study conducted by Nancy Curry and Tim Kasser found that coloring mandalas actually drastically decreased anxiety levels in study participants.

Research has even suggested that adult coloring can mimic some of the benefits of meditation.

This quiet state of mind might be helpful for someone looking to unwind from a long, stressful day at work, or may be beneficial in someone who suffers from anxiety associated with disorders like PTSD or depression.

“The act of coloring requires repetition and attention to detail, so you are able to focus on the activity, rather than your worries.” according to Susan Gordon, LMSW, manager of Piedmont Sixty Plus.

Improves focus & mental strength
Coloring requires a certain level of focus – the coordination of staying within the well-defined lines.

Leslie Marshall, a clinical counselor, states that coloring “opens up the frontal lobe of the brain- the home of organizing and problem solving – and focuses the mind.” The act of focusing selectively on a defined and detailed task, like coloring, can also help us to train our brains, improving our reasoning abilities and making us more logical, efficient, and mentally strong.

There are even some studies that point to coloring activities delaying or preventing age related illnesses associated with diseases like dementia.

Exercises the brain & improves motor skills, and coordination
Coloring goes beyond simply being an activity for stress relief and relaxation alone.

Psychologists say that actions relating to coloring-in forms and shapes exercises the logic-based portions of the brain. While the creative areas of the brain are activated by color pairing, and the mixing and matching of colors.

Helps you to unplug

Coloring books can give us a much needed break from our smartphones, computers and other devices. Whether it’s our desks at work, or scrolling through social media updates from friends, it is increasingly more common that our entire days are held captive by screens.

According to Pew Research “67% of cell owners find themselves checking their phone for messages, alerts, or calls — even when they don’t notice their phone ringing or vibrating.”

It’s clear that we need some time away from technology and we need hobbies that will drive us to unplug. Perhaps coloring can be that short-term escape for us, an escape to a world of creation rather than consuming.

Improve Sleep
Helping us unplug leads nicely into the next possible benefit of adult coloring books, improved sleep. Coloring might be a good pre-bedtime activity, because it could keep us away from our electronic devices.

It might also offer reprieve from exposure to blue light emitted by the screens of electronic devices. At night this exposure can reduce our levels of melatonin, a hormone vital to sleep.

Replace patterns of negative thinking
Focusing on coloring, the lines, the sections and the color selection process often pushes thoughts, of other issues we normally concentrate on, out of our minds. Worries about health issues, or adult situations like family life, bills, debt, or future successes and failures.

It might just be an activity that can shift us away from negative thinking and replace negative thoughts with positive ones.

Dr. Pearson further explains, “you have to look at the shape and size, you have to look at the edges, and you have to pick a color. it should occupy the same parts of the brain that stop any anxiety-related mental imagery happening as well.” in addition, when we color, it brings out our inner child. we are reminded of the days when life was simple and our biggest worries were much more trivial.

There’s little barrier to entry
What’s great about coloring is that coloring books and colored pencils are relatively affordable for almost any level of income.

Another positive is, unlike with art therapy, you don’t really have to be artistic or have any particular skill level to enjoy the benefits of coloring. Most of us, by the time we are adults, are fully able to color in between the lines, unless some medical issue makes it more difficult.

Coloring is like guided creativity, there’s no reason to get stressed because the lines are already there, and there is no consequence to “messing up”.

Coloring can also provide a sense of accomplishment. a feeling of gratification can arise from seeing a coloring page through until completion. It can elicit positive feelings.

Researchers at New Zealand’s University of Otago chose to put the claims of adult coloring books to the test.

As part of a recent study, published in the Creativity Research Journal, Psychologists gave 115 young women either a coloring book or a book of puzzles. Each day for seven days, the participants colored-in pictures of animals, mandalas, and nature scenes, or completed non-artistic puzzles, like sudoku, and word searches. They also rated their stress, depression, and anxiety levels before and after completing the activities.

The study confirmed what many of the other studies had already reported: that the coloring exercises reduced symptoms of depression and anxiety, to a small degree, and seemed to improve the mindfulness of participants.

“Coloring could be considered an act of everyday, little ‘c’ creativity in much the same way as gardening or gourmet cooking,” the paper concluded.