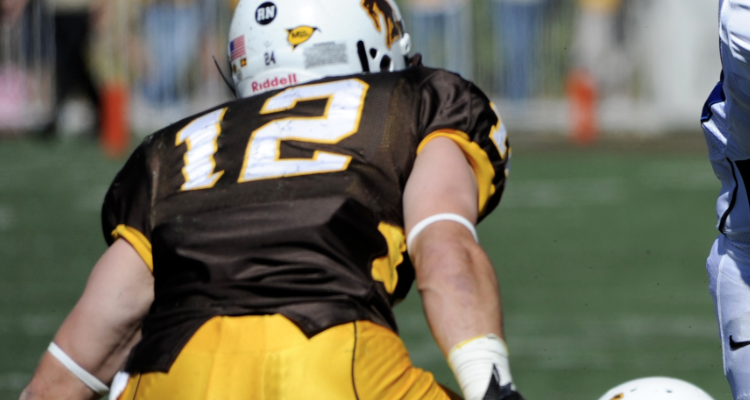 LARAMIE, WY.  –  Wyoming’s first scrimmage of 2019 Spring Practice took place in an outreach event at Dick Cheney Alumni Field in Casper, Wyo., on Saturday and featured an opportunity for a number of young players to showcase their talents as the Cowboys scrimmaged for 83 plays before a large crowd of Wyoming fans.

Saturday’s scrimmage in Casper was free to the public. In partnership with Pepsi, the scrimmage benefited Wyoming Food for Thought. Every fan who brought a non-perishable food item to the scrimmage received a free Pepsi product at the game. The donated food items were given to Wyoming Food for Thought Project in Casper, which is an independently run, local non-profit 501(c)(3) organization founded on the idea that a local solution to hunger is possible.

Several of the young players who stood out during the 80-plus play scrimmage were also Wyoming natives. The leading rusher on the day was redshirt freshman Brett Brenton, who played his high school football at Natrona County High School in Casper. Brenton rushed for 71 yards on 17 carries and scored on a 15-yard touchdown run. The other Cowboy to score a touchdown in the scrimmage was sophomore fullback Jeff Burroughs from Yoder, Wyo. Burroughs had a four-yard TD run, and ended the day with 30 rushing yards on 11 carries to go with three receptions for 14 yards. The third Cowboy to have a big day rushing was redshirt freshman quarterback Ryan Marquez, who took reps at both quarterback and running back on Saturday. Marquez rushed for 44 yards on 11 carries.

Immediately after the scrimmage, head coach Craig Bohl, his team and coaching staff stayed on the field to sign autographs and take photos with fans and speak with the media.

“I want to say thanks to all the fans and media who came out today,” said Bohl. “It was great to see so many Cowboy fans come out to see our team. I know we have all our regular media who are with us every day after practice, and we appreciate those guys, but it’s certainly nice to see all the local Casper media out here today and we want to say thank you to them. It’s great for our players to leave Laramie and see another part of the state.

“Concerning the scrimmage, I think we accomplished a lot of the things that we wanted to. We wanted to see who could throw, who could catch, who could run, who could tackle. The scrimmage was pretty vanilla, which is what we anticipated, but I thought we moved the ball well on the ground today and I thought our offensive line did some good things, as well as our running backs. It was a little bit of a mixed bag from a quarterback perspective. Both the two experienced guys did some good things, but there are some things we’ve got to work on.

“Defensively, I thought we tackled pretty well today. We were a little bit soft on the defensive front today, but I thought we had a good pass rush. The kicking game — Cooper (Rothe) is right where he needed to be.”

Rothe accounted for the only other points of the scrimmage successfully connecting on his lone field-goal attempt of the day from 32 yards, and he was a perfect 2 for 2 in extra points. The first touchdown for the Cowboys came following a fumble on a punt return. Redshirt linebacker Hicks recovered the fumble and returned it 28 yards inside the defense’s 10-yard line. A couple plays later Burroughs carried the ball across the goal-line from four yards out for the touchdown. Later in the scrimmage, Brenton broke through the middle of the line and scampered 15 yards into the end zone breaking tackles along the way.
“I call it the Pony Express,” said Bohl. “We had an all-Wyoming backfield there a couple of times. We had Skyler Miller (from Torrington, Wyo.) and Brett Brenton (from Casper), in the backfield together, so that was kind of fun to see. We held X (Xazavian Valladay, sophomore running back) out today. We’re down in tailbacks a little bit, so we’re watching how much contact we give him. Brett (Brenton) did some good things. It was neat for him to come back to his hometown on his home field and have a touchdown. He’s a tough runner, and it’s fun to see him out there.”

Bohl was asked what his evaluation was of the play of this top two quarterbacks, redshirt freshman Sean Chambers and sophomore Tyler Vander Waal.

“It’s always interesting when you take younger players and put them in a different environment, even though it’s spring ball it makes a little difference,” said Bohl. “I thought Sean (Chambers) came out early and was a little bit rusty and some of his throws were a little bit errant, but as the scrimmage went along he threw the ball better. I thought Tyler (Vander Waal) was throwing the ball better, but then he had a really poor throw on the one interception. They’re a work in progress, but it was good to get those guys out here in a scrimmage setting.”

Asked further, if he thought one of the quarterbacks had a better day than the other, Bohl replied that he wanted to watch the tape before he made any statements. Bohl said he did not plan to announce a depth chart after this first spring scrimmage.

There were three turnovers forced in the game. The fumble on the punt return that led to Burroughs TD run, an interception by senior strong safety Alijah Halliburton of Aurora, Colo., and an interception by redshirt freshman cornerback Blake Harrington from Prosper, Texas. Harrington made his interception in the end zone to prevent a scoring threat. In addition to the two interceptions, the defense also broke up six other passes, recorded 6.0 tackles for losses of 29 yards and sacked Cowboy quarterbacks 3.0 times for 25 yards.

Regarding the turnovers forced by the Cowboys on Saturday, Bohl said, “Turnovers are always big. Anytime you can get a turnover on a special teams play it usually results in a big change in field position. The turnover we got on the fumbled punt return was an explosive play, and it obviously was big because it set up a touchdown.”

“I thought they (the linebackers) did some positive things,” said Bohl. “There were some good hits. We stressed those guys a little bit today. Logan Wilson (senior linebacker from Casper) did not play today. That was predetermined, so it was a good opportunity for our younger linebackers. I didn’t see a lot of missed tackles. I saw guys form up and wrap up well.”

Bohl summarized where he thought his football team was as it concluded the third of five weeks of spring practice by saying, “Outside of all that, we’re really excited about the progress we’ve made. I thought it was a clean scrimmage. The ball wasn’t on the ground a lot. I don’t believe there were any penalties that were called. We were pretty disciplined today.”

The Cowboys will return to practice on Tuesday, April 16. Only two of the upcoming Srimmages are open to the public. One on Saturday, April 13th in Casper at Dick Cheney Alumni Field and the other on Saturday April 27th, the Spring Game at War Memorial Stadium.