96 Year Old Man Helps Save Bluebirds by Dedicating His Retirement 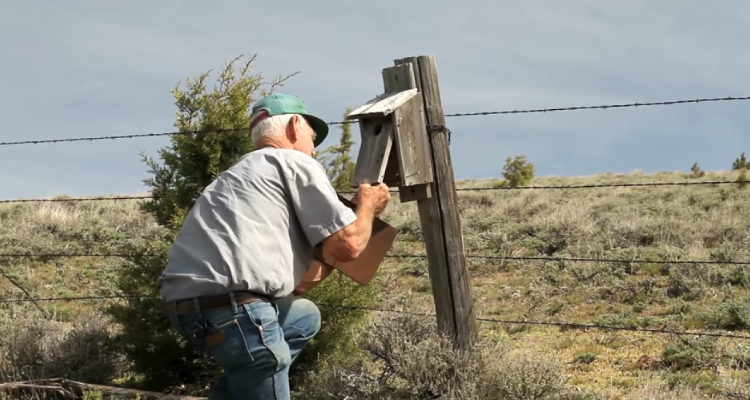 96 Year Old Man Helps Save Bluebirds by Dedicating His Retirement

SOUTHWEST, ID. – The year was 1979 and Alfred Larson, at age 60, had retired from his job at a sawmill near Boise in Southwest Idaho. Larson was searching for a hobby to keep him busy and active. He remembered reading an article in National Geographic about crafting nests for bluebirds, which were experiencing a decline in numbers. Larson felt the birds had a need, and that building wooden nests was something he could do to help.

The rest is history as they say, fast forwarding almost four decades later, Larson had raised over 27,000 bluebirds in Southwest Idaho by the age of 91. By age 96, Alfred had built and monitored nearly 350 nest boxes across Southwest Idaho.

Alfred Larson had indeed found a hobby that would keep him active, as each summer Larson travels 5,000 miles along his five ‘bluebird trails’ that span five counties in Idaho.

The ‘Bluebird Man’ as he has came to be known, has spent the last 35 years of his life dedicated to recovering North America’s bluebirds while serving both as an active citizen scientist, and an incredible inspiration for future ones.

“I got carried away,” Larson said in a piece in Audubon. “I settled on a simple design that [was] easy to build and easy to monitor. I kept adding more boxes on these trails, and these birds responded.”

In the 1970s and ‘80s bluebird recovery efforts, like Larson’s, grew in popularity. People were using homemade nest boxes to attract the birds, and as a result, the recovery effort became one of the largest grassroots conservation activities in North America.

All three North American species of bluebird, which had experienced a dip in population due to widespread use of pesticides, nest crowding from other species, and other factors, have stabilized thanks in part to the nest boxes and efforts of people like Alfred Larson.

Larson has been passing his knowledge on to trail buddies, assistants and volunteers, but many of them remain wary of the day he decides to retire, for a second time, feeling his devotion to bluebirds will be hard to match.

Larson’s connection to bluebirds, has been chronicled in a 30-minute documentary, titled ‘Bluebird Man’ by Filmmaker Matthew Podolsky.

You can view the film in it’s entirety below.

The filmaker stated that, “Al is a living example of how much one person can achieve when they set their mind on a task”. “[Bluebirds] have given meaning to Al’s life, and they are truly the secret to his longevity.” Podolsky concluded.